40 years on, after the 1982 massacre of Sabra Shatila, Palestinian Refugee Camp, Lebanon 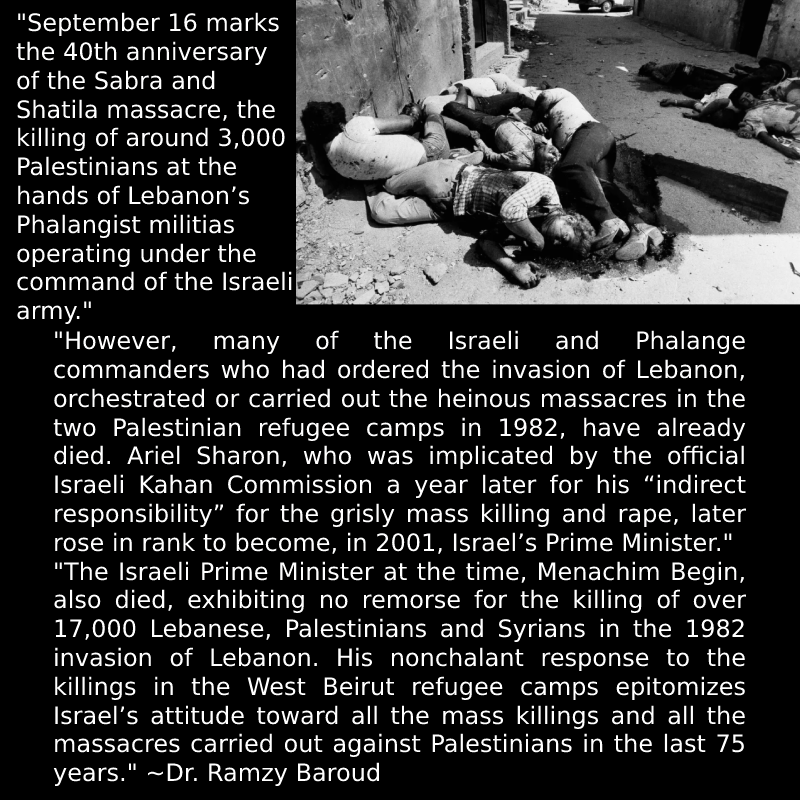 As Lebanon plunges into political chaos – banking corruption, power cuts and exploding prices, the Palestinian refugees, already marginalised without rights and unable to climb out of poverty, have fallen deeper into despair.

Walking through the camps one sees tangles of bare electric cable, dripped on by corroded air conditioning units, hanging dangerously low in the narrow, dark passages that run between people’s homes. This combination of raw electricity and water frequently results in puddles of electrified water. Adults and children alike have fallen victim to electrocution as they have passed along these narrow corridors. Ironically the only positive aspects of the all too frequent power cuts is that no one gets electrocuted. In the camp environment, where survival is precarious at best, there is no real or lasting security. Threat can come from both internal and outside forces. There are many reports of injuries when ceilings collapse as a result of substandard cement and rusted building frames. Besides the politically controlled ban on building materials into the camps, the scarcity of space and lack of financial resources, means that as the camp population expands, the only way to go, is up. There is also no longer space to bury the dead so bodies are placed on top of already deceased family members. Women who have lost their husbands face particular difficulties, such as lack of income, protection and social standing.

The smell of open sewer pipes is especially acrid during the humid summer months. The possibility of earning a little extra to feed their families forces poverty stricken individuals to resort to rummaging through bags of rubbish to gain the meagre Income paid out for the recycling of plastic. This leaves torn sacks of rubbish spilled out across the streets with rotting vegetables creating an environmental health hazard. In all of Lebanon there are growing concerns about the availability of fresh water. Should the plastic bottles of fresh drinking water become scarce the Palestinian refugees will be amongst the first to experience it.

However terrible as the conditions in the camp are, it isn’t the physical deprivation that sears the heart and leaves raw memories of exposed pain, it is the remembrance of a lost homeland and the remembrance of lost loved ones. The massacre in Sabra Shatila, compounded by the knowledge of earlier massacres and the threat of more brutality, remains an open wound. There has never been accountability for the crimes and there has never been justice. These open wounds go back as far as the 1948 massacres of Deir Yassin  and other Palestinian villages which led Palestinians to flee their homes and take refuge in nearby Arab countries, including Lebanon.

Some of those who fled the siege of Tel a’Zaatar  (1976), had taken refuge in Shatila. Amongst the Palestinian communities and those who seek accountability and justice for them, there is talk of establishing a cemetery and raising a monument in the Sabra/Shatila Camp to commemorate the lives of  3,500 plus who were brutally slaughter in September 1982. Such a monument could bring about a modicum of comfort to the families of those who died. It would provide a place to go for family members to place small remembrance gifts and communicate with those they lost. Without acknowledgment of what happened it’s not possible for survivors and dependents of those slaughtered to move on. It is not possible or moral to bury the crime in the same way that Israeli soldiers came in with bulldozers and buried the dead.’

‘Right of Return’ – which is enshrined not only in International Law, but  basic to the higher laws of what is morally right and just, has left Palestinian refugees in a no man’s land of a legalistic political quagmire. On the one side the Lebanese authorities deny Palestinians the basic rights of work and ownership of property since they claim that to give Palestinians the full rights of Lebanese citizenship would discourage them from returning to their homeland. However on the other side, Israel refuses to allow any consideration of ‘Right of Return’. This contrasts starkly  with Israeli policy where – ‘Right of Return’ is for all Jews around the world, regardless of whether they have any connection with historic Palestine, or not.

Western governments regularly publicly announce their ongoing allegiance to Israel. Liz Truss, being no exception, recently swore allegiance in her recent acceptance speech. This and talk of normalisation in relations  between the Arab countries and Israel, leaves Palestinians with a sense of bitter betrayal. It creates a calculated amnesia that only serves the economic interests of the already privileged, elite. The lack of accountability for the series of massacres inflicted upon Palestinian populations- Deir Yassin, Tel a’Zaatar, , Sabra Shatila, Jenin and more, is like rubbing salt in open wounds. Normalising relations without accountability and justice is to normalise crime. One wonders how long Palestinians will have to wait for justice to be served. For a true and lasting peace in our troubled world this must be a condition.