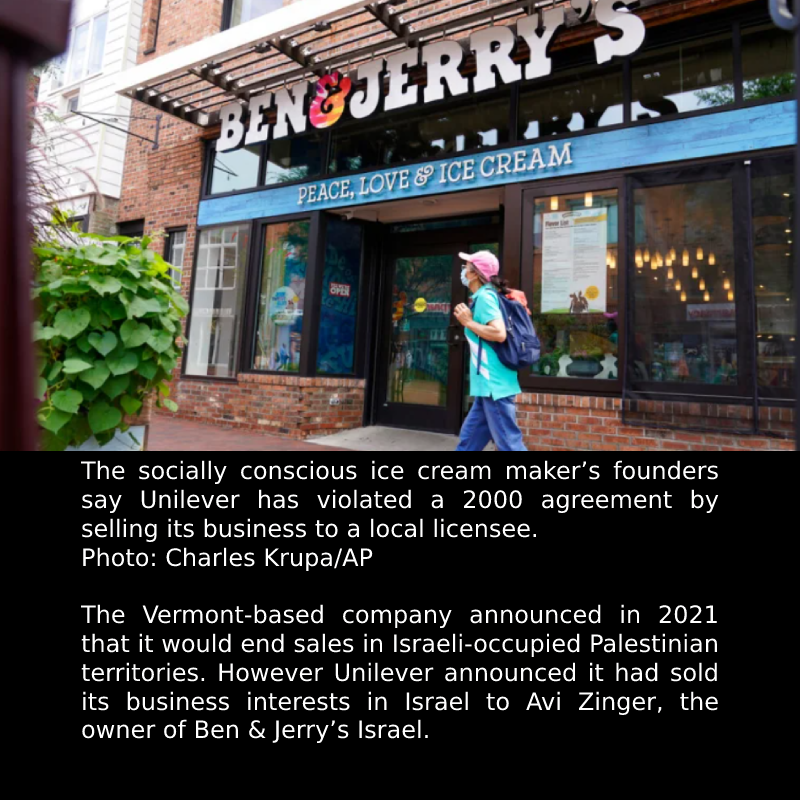 The founders of Ben & Jerry’s said on Sunday that the renowned ice cream maker’s parent company Unilever had violated the merger between the two companies, after it sold its business in Israel to a local licensee, avoiding restrictions on the sale of the socially conscious ice cream company’s products in the occupied West Bank.

“That agreement gave authority over the social mission to the independent board of Ben & Jerry’s. Unilever has usurped their authority and reversed the decision that was made and we can’t allow that to happen, we can’t sit idly by,” Ben Cohen said in a televised interview on the American media outlet MSNBC.

Cohen’s business partner, Jerry Greenfield, said the agreement, signed in 2000, is legally binding and needs to be adhered to.

Unilever, in contrast, has said that it retained the right to make operational decisions for Ben & Jerry’s and that the sale could not be undone because it has irrevocably closed.

The Ben & Jerry's independent board of directors is suing Unilever for violating the merger agreement Jerry and I negotiated in 2000. We're joining @mehdirhasan on @MSNBC tonight to talk about what's at stake for the company & the future of socially responsible business at 8:30p

Ben & Jerry’s said earlier this month that it plans to amend its lawsuit challenging Unilever’s sale of the Israeli business in a federal court in New York. Unilever must respond by November 1.

In July 2021, the company, based in Burlington, Vermont, in the United States, announced it would end sales in Israeli-occupied Palestinian territories, calling it “inconsistent” with the progressive values and social mission it retained the right to promote.

“The decision of the company to not sell ice cream in the occupied Palestinian territories is consistent with values the company has had throughout its history – of fighting for human rights and dignity,” Greenfield said.

That move, however, prompted a backlash against Unilever, including divestments by pension funds from the consumer goods company and accusations of anti-Semitism by some Jewish groups.

The episode has highlighted the challenges facing consumer brands that have backed progressive causes and attempted to also take a stand on Israel’s occupation of Palestinian land, such as San Francisco-based Airbnb, which in 2019 reversed its decision to delist Israeli settlements in the occupied West Bank, which are deemed illegal under international law. 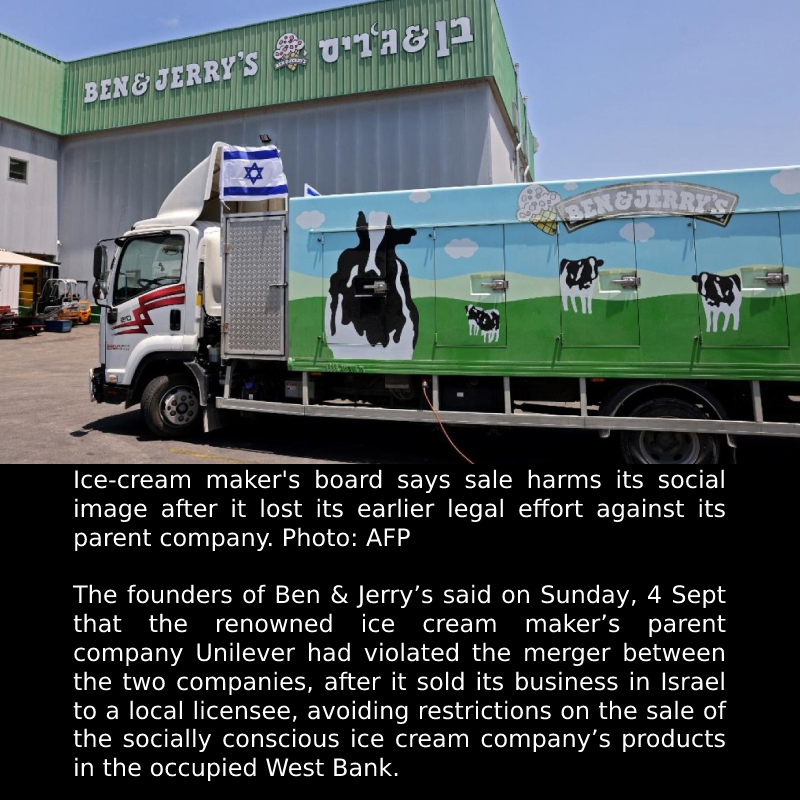 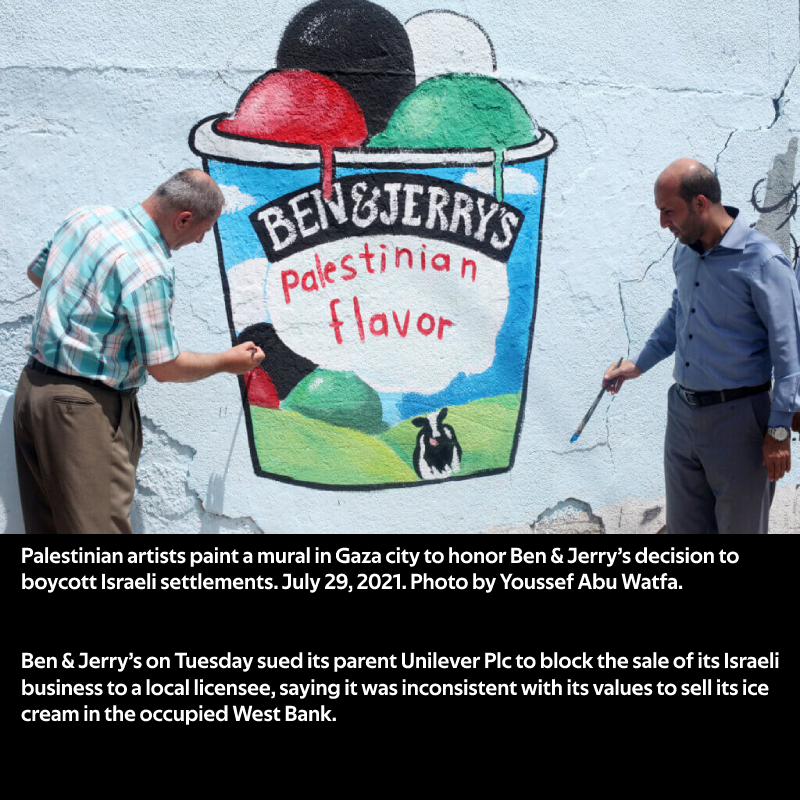 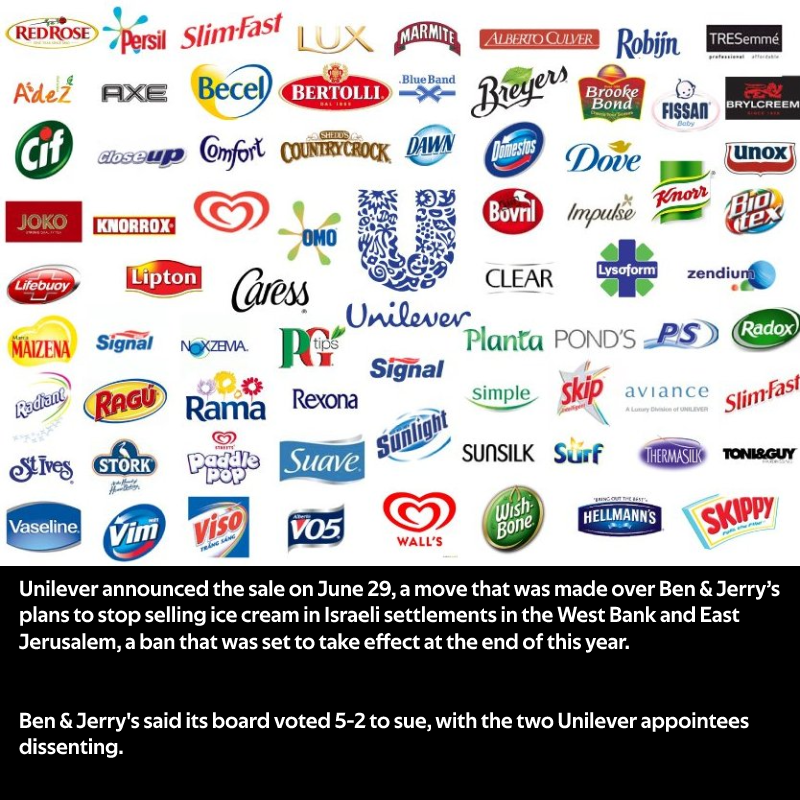 Tags:ApartheidBDSBen&JerrysBoycottFreePalestine
previousWhat can the Oslo and Sabra and Shatila anniversaries teach us about the Palesti…
nextBen & Jerry’s founder: Unilever violating deal over Israel sale READ: #Ap…