By Ragip Soylu in Ankara. 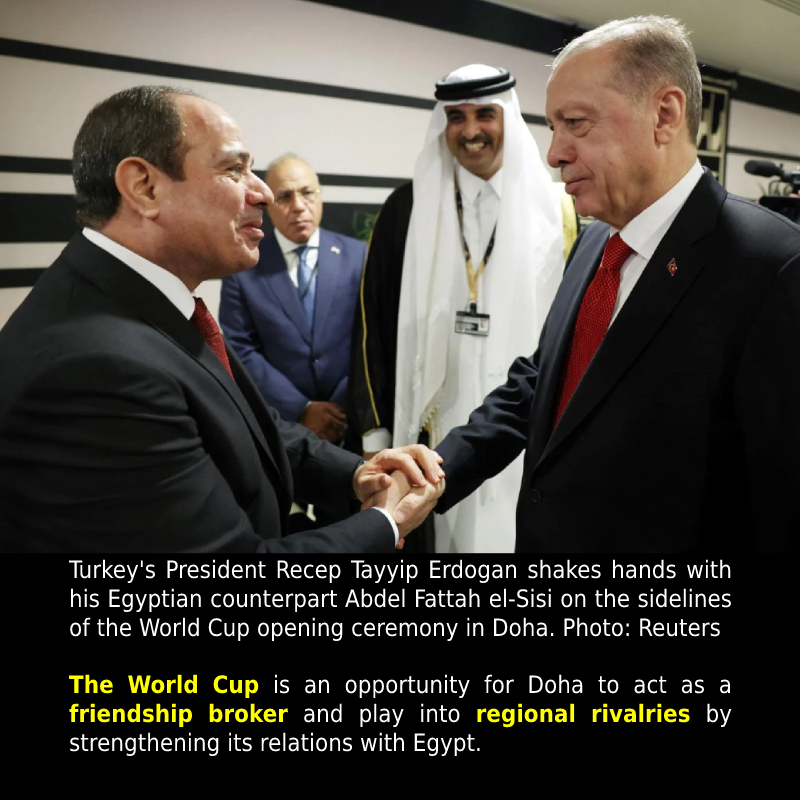 It was no coincidence that Qatari Emir Tamim bin Hamad Al Thani was pictured grinning in the background when Turkish President Recep Tayyip Erdogan and his Egyptian counterpart Abdel Fattah el-Sisi shook hands for the first time just before the opening ceremony of the World Cup in Qatar on Sunday.

Several sources familiar with the meeting told Middle East Eye that Doha had been trying to broker a brief meeting between the two former foes since summer.

One Turkish source said Erdogan wasn’t initially very sympathetic to the idea of shaking hands with someone he previously called a “murderer” and a “dictator”. Erdogan’s animosity for Sisi had been a response to the 2013 Egyptian military coup, which overthrew the country’s democractically elected government and bloodily cracked down on any critics.

“Qatar wanted all problems between the two countries to be resolved, and the emir wanted this handshake to happen during the World Cup,” the source said.

Despite year-long reconciliation talks between Turkey and Egypt, the relations are still fraught over a set of issues: from competing interests in Libya to the presence of the Muslim Brotherhood leaders in Turkey. Yet Turkish officials believe what Cairo has really been after is a handshake with Erdogan, which would signal complete acknowledgement of Sisi as the legitimate president of Egypt.

As they expected, the Egyptian presidency in a formal statement said on Monday that the encounter would mark “the beginning of developing bilateral relations”.

There are several theories that explain the Qatari motivation for such a reconciliation.

Ali Bakir, a non-resident senior fellow at Atlantic Council, says “the handshake initiative” by the Qataris had no political motives. “It was more rooted in sports diplomacy,” he told MEE. “The Qataris wanted to show that sports can be a great tool to promote peace, stability and prosperity to all nations including those locked in conflict.”

Bakir added that Doha originally planned to undertake other similar initiatives such as arranging another handshake between the king of Morocco and the president of Algeria, bitter rivals that currently have no diplomatic relations. But the absence of King Mohammed VI prevented it from happening, according to Bakir.

Qatar also has a political interest in bringing the two countries together. Since the blockade on Qatar ended in January 2021, Doha has been building its own ties with Egypt, stepping up its game in recent months by injecting $3bn into Egypt’s central bank and having Sisi visit the Qatari capital.

Cairo also wants to diversify its portfolio of Gulf creditors, which economically it cannot survive without. Some Ankara insiders say that in recent months there have been tensions within the bloc that previously targeted Qatar, with the Saudis and Egyptians on one side and the UAE on the other.

Bakir believes Turkish-Egyptian rapprochement will in turn strengthen Qatari-Saudi relations, and it may unintentionally push UAE to further deepen its recently thawed ties with Turkey.

There is another issue that Qatar wants to benefit from: Libya.

“Qatar has an interest to ensure that ties are mended across the region with a particular view towards Libya,” says Andreas Krieg of King’s College London. “Qatar is trying to get the external patrons in Libya aligned to prepare the ground for a more lasting political deal.”

Since 2019, when eastern Libyan forces unsuccessfully attacked the internationally recognised government in Tripoli, Turkey has been locked in competition with the UAE and Egypt, who supported the assault.

Earlier this month, Cairo protested the Turkish government’s recently signed hydrocarbon exploration deal with the Libyan Government of National Unity, and said Tripoli lacked authority on the matter because its mandate has expired.

According to Krieg, Qatar is now trusted by both Turkey and Egypt, despite the animosity of recent years, and that trust ultimately led to the Sisi-Erdogan handshake.

First time the Quran is recited at an opening of the World Cup during a performance by Morgan Freeman with Ghanim Al Muftah who recited Surah Al-Hujraat verse 13.

The verse: “Oh mankind, indeed we have created you from male and female and made you peoples and tribes that you may know one another” .