Gaza: The Longest Siege in Modern History – 2007 to the Present 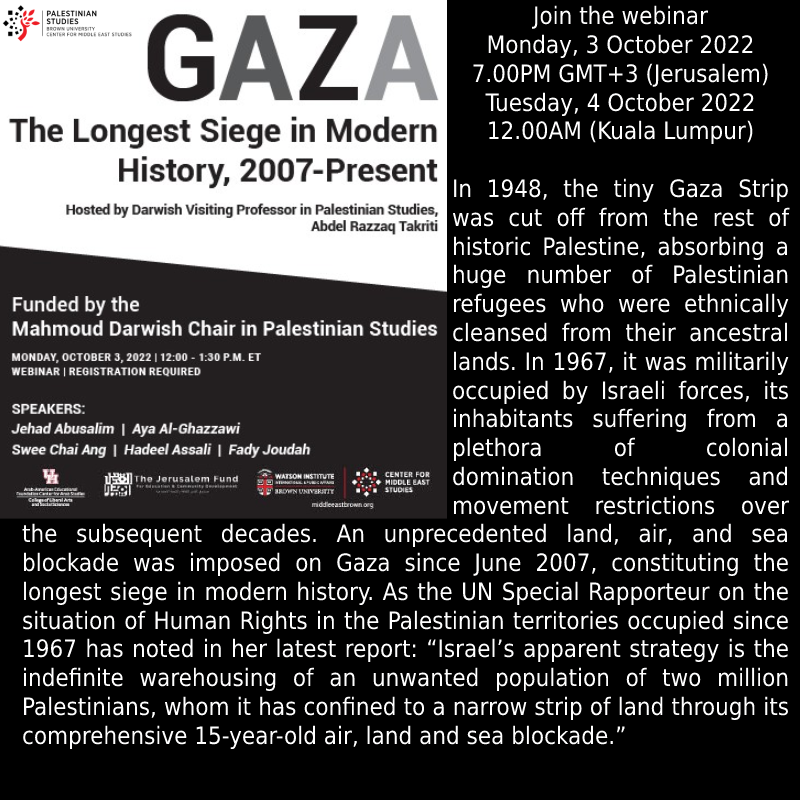 The outcome has been a harrowing process of de-development resulting, as the UN Special Rapporteur notes, “in a 45 percent unemployment rate, a 60 percent poverty rate and with 80 percent of the population dependent on some form of international assistance, in significant part because of the hermetic sealing of Gaza’s access to the outside world”.

Besides this siege imposed by the Israeli state with Egyptian state collusion, the Palestinian people living in Gaza have been assaulted and bombarded by Israeli forces from land, sea, and air on a regular basis. Their cities, villages, and refugee camps have suffered from several Israeli military invasions, which have led to the killing of thousands and the maiming of tens of thousands of Palestinians. Centering the voices of Palestinian scholars and intellectuals from Gaza, this panel examines the political and historic context of this process, accounting for its enormous human toll but also highlighting the ongoing will to resist this oppressive colonial present.

Click here to REGISTER
Tags:BrownUniversityCriminaliseWarEnergisePeaceFreePalestineGazaWebinar
previousThe Practice of Lying: The Psychopathic Nature of the U.S. Government. READ: …
nextWEBINAR! Gaza: The Longest Siege in Modern History – 2007 to the Present Regi…