How it feels to visit an apartheid country 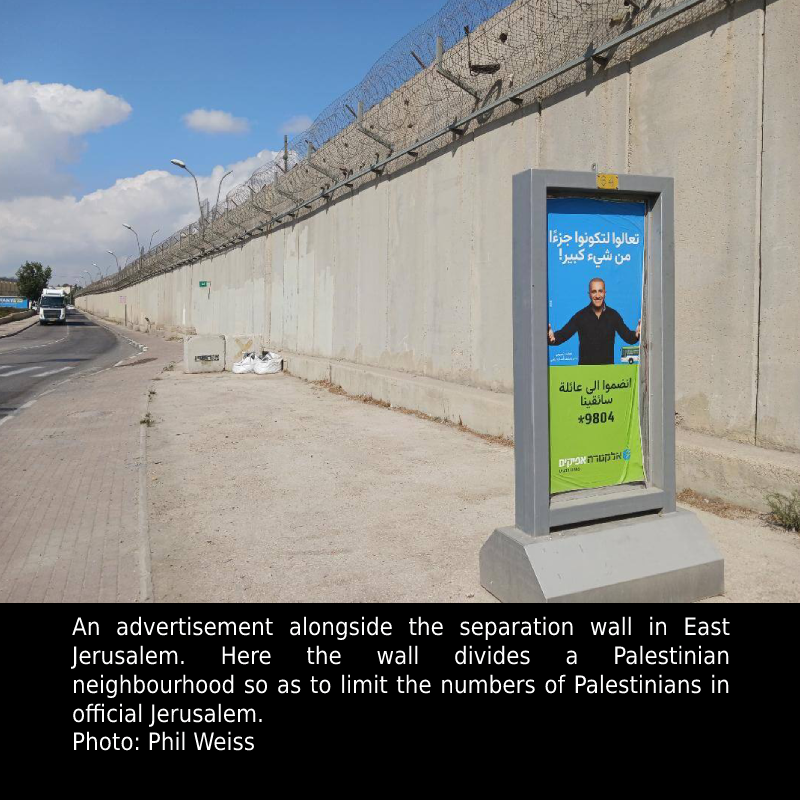 Racial profiling in Israel is rampant. Abuse and invective are normal. This is the daily machinery of separating Jews from Arabs and justifying it in traditional colonial terms.

Every time I visit Israel and Palestine I come home so struck by the injustice that I say to myself, Well you are a writer, you should be able, in 1000 words or so, to convey the enormity of what you have seen so that the system falls apart like a house of cards for an American reader. This is my latest effort to do just that.

The main impression I had on this visit, is the feeling of Separation. I was bowled over by how separate the Israeli Jews are from the Palestinians, and the huge efforts undertaken to prevent mixing of cultures. When you go through the airport or West Jerusalem or Tel Aviv, you feel like you are in a city in Eastern Europe. I saw no men in the airport in traditional Arab dress. I saw a few women wearing the hijab. You don’t see many Arabic signs. You don’t see displays of Arab crafts or furnishings, you don’t see the sights and smells of Arab markets or streetlife. No, the Zionists brought their own society to the Middle East.

All the time you are here you reflect that you are plunk in the middle of the “Arab world.” Not long ago, the culture here was largely Muslim. A few decades ago, you could catch a bus from Jerusalem to Damascus, or Beirut, or Cairo, or Amman or Baghdad. Now you can’t do any of that. Jerusalem has been declared the “eternal capital of the Jewish people,” and there are high walls topped by concertina wire to separate it from the Arab masses. A historic Palestinian neighborhood was bulldozed so that Jews could sanctify the Western Wall, ala the Vatican. And even liberal Zionists idealize this separation. The late novelist Amos Oz said that Jews and Palestinians need a “divorce” and separate houses, and he is a hero to J Street and Americans for Peace Now.

Israel really has established an outpost of civilization, as it conceives these matters, in a very traditional colonial mindset. 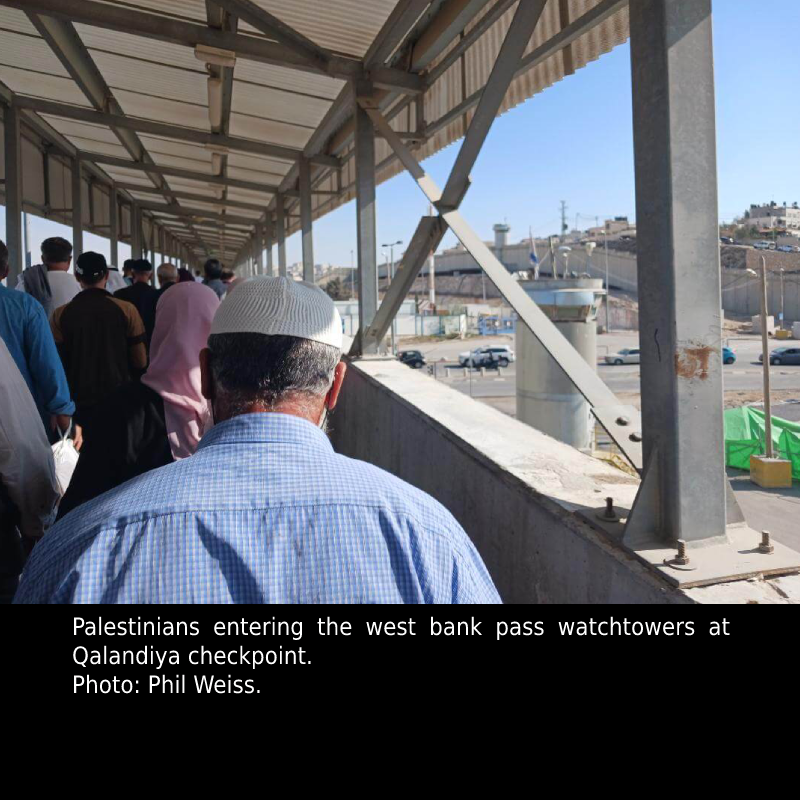 Any time you cross over into that other world, you must go through militarized checkpoints, and the culture is entirely different. The roads are narrower, the signs are mostly in Arabic. Many people wear traditional dress, and the street life strikes this foreigner as Arab.

The amazing thing about Israel is that it has pulled off colonization in an anti-colonial era. But I am not trying to analyze it, just to convey the feeling. It feels weird and unfair that the Zionists have imposed this order, and they understand this. They know it’s unfair, and so there are guns everywhere and the voters have lately elevated a racist fascist, Itamar Ben-Gvir, because Israelis know that Palestinians don’t like being a subject people, so they must preserve the order through brute force and power politics. You see the brute force all around. All the young soldiers on the buses or in the roads with their guns dangling at their sides. They’re not here for the Syrians or the Egyptians or the Jordanians, or Iraqis, Israel’s enemies of old. No, they’re here for the Palestinians on the other side of those concrete walls, because Palestinians resist the whole idea of a “Jewish state.”

As you would too if it were established in your city.

The racial profiling is rampant before your eyes. I sauntered through Damascus Gate at midnight. The young Palestinian just behind me got stopped by soldiers demanding his I.D. card.

Of course, Israelis speak of what a bad neighborhood they live in. The only answer to that propaganda is that if you throw people out of their houses and off their land and live there for 75 years without any gesture to make things right, no you just keep on taking their property, I promise you — you will live in a bad neighborhood.

Here is a simple proof of the unfairness. Every day Palestinians in Israel and the occupied territories use money on which is imprinted the portraits of men who directed their ethnic cleansing and massacres. They travel inside Israel on roads named after these men too. I found this unsettling and embarrassing, being a witness to such humiliation. In talking to Palestinians in Haifa, I caught the name Ben-Gurion Avenue in my throat — I was afraid the mere utterance would damage their dignity.

I often thought about the promotion back in the U.S. of the “startup nation,” with its biotech and cyber industries that are said to help the world. The miraculous startup nation justifies its presence with its material advantages and Nobel Prizes (one Nobelist came to a shiva I attended in Jerusalem) as if that makes its rule acceptable to Palestinians. But of course it doesn’t. They have fewer or no rights, and it is rubbed in their faces all the time. There is something crude and dispiriting about this; you don’t perpetuate apartheid without consequences to all concerned. The journalist Tom Dallal shared with me this photo of riding a train with a soldier who pointed his gun between his legs the whole time without regarding it as rude or unusual. 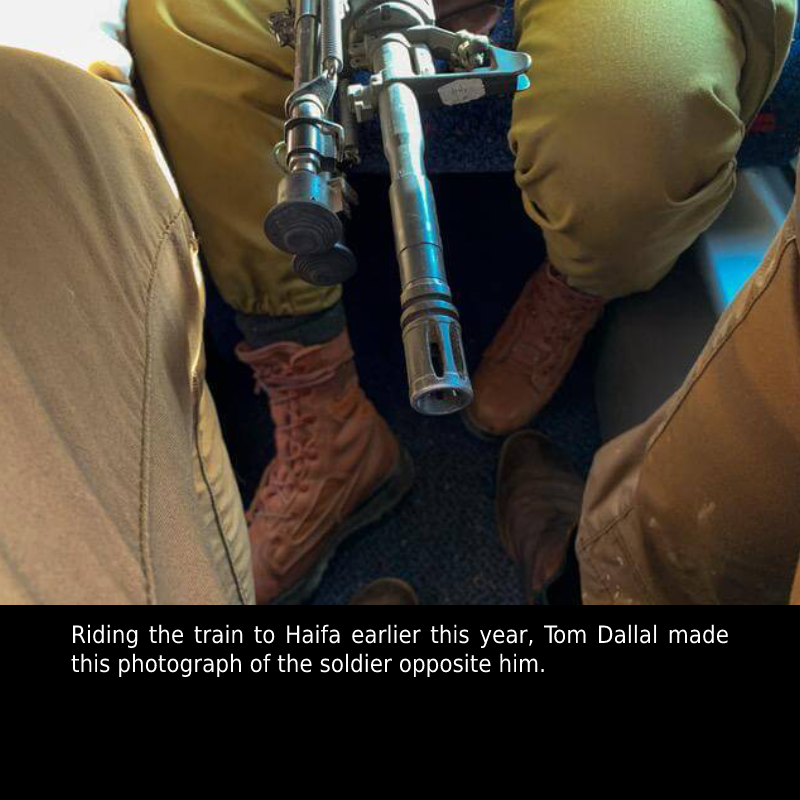 When a Palestinian in Ramallah asked if it was offensive to American Jewish visitors to compare Israeli soldiers to Nazis, my colleague Scott Roth shook his head and said the Holocaust is pertinent. “You can’t build a society on trauma. They built Israeli society on trauma.”

Roth says that Israel brings out the worst in people. He wandered into the King David Hotel lobby one morning and saw a group of American visitors looking at the famous signatures set in tiles in the floor, and one began jumping up and down on Obama’s signature, laughing as she called out expletives. This kind of abuse and invective is normal here. Just look at the picture Itamar Ben-Gvir lately posted of the Palestinian politician Ahmad Tibi wheeling a suitcase in Ben Gurion airport. “Great news. Leave and don’t come back.” (Michael Koplow’s translation.)

You feel that crudeness and the tension. A Palestinian friend told me that when he visited New York recently he experienced visceral shock in a restaurant when he heard a loud Israeli conversation at a nearby table. “There is a word in Arabic that means to feel electrocuted — batkahrab,” he said. “These are the same voices that when I usually hear them, they are shouting at me that I have done something wrong.” Yes, young soldiers, barking at my friend, an architect in his 40s.

You feel the tragedy of it. You observe that Palestinians are human beings just like anyone with aspirations and dreams and pride and dignity, and yet you see them being put down before your eyes and having to bear it to survive. I keep thinking of a girl of 20 or 21 with earphones and fashionable clothing getting off the bus at Qalandiya checkpoint with her bag over her arm, that said, Van Gogh Museum, Amsterdam. She reminded me of me and my friends at her age, showing off our taste. But she has no freedom of movement, and no political rights. 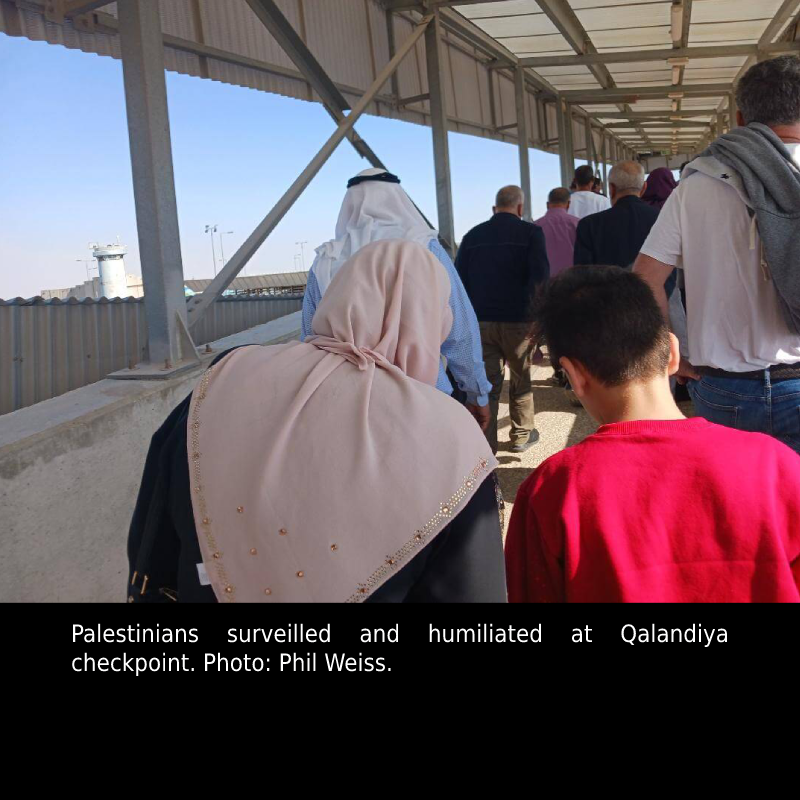 That’s my overwhelming sense of this visit. People not very different from me are persecuted at every turn. Many international human rights organizations have now laid out the apartheid argument in systematic legal analyses. I can only tell you about the feeling of it: Everywhere you go these Arab people are to be separated from the Jewish state and their culture erased. The shame I felt as a Jewish person is unquantifiable, and is the reason I will keep doing this work. Jewish values meant one thing when I was raised – “That which is obnoxious to you don’t do to another person,” in Hillel’s words. Or as Americans say, the Golden Rule. That value is trashed everywhere I went in Israel and Palestine.

It can’t last. When you see an unfair arrangement balanced totally on massive military and financial advantage and power politics, but unbearable to the subjugated people, history tells you it can’t last. Even the State Department acknowledges this when they say “the status quo is unsustainable.” When and how it falls who can say. But it can’t last.