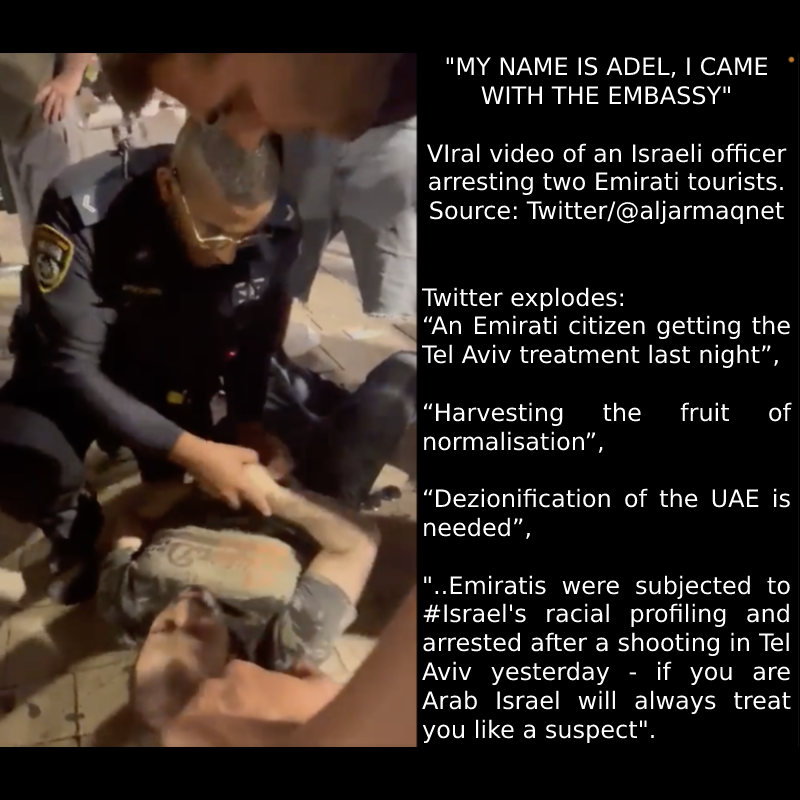 The wrongful arrest of two Emirati tourists as suspects in a shooting in Tel Aviv has caused outrage online.

A viral video of Israeli forces arresting two Emirati tourists in the street after shots were fired in Tel Aviv has spurred online accusations of racial profiling in Israel.

Following the shooting in Tel Aviv’s Dizengoff Street on Wednesday night, Israeli police officers detained the Emirati nationals as suspects based on their Arab features.

Calling the incident the “Tel Aviv treatment”, reactions online heavily criticised the Israeli police brutality against Arabs, with many emphasising that the normalisation of relations between Israel and the United Arab Emirates had not changed the reality on the ground.

The two tourists were investigated and later released after their identities were confirmed.

“An Emirati citizen getting the Tel Aviv treatment last night,” one social media user wrote, referring to the racial profiling that Palestinians are regularly subjected to.

'my name is Adel, i came with embassy'

Some social media users viewed the incident as yet another demonstration of Israel’s racism against Arabs, with many calling on the Gulf to stop normalising the apartheid regime.

“Harvesting the fruit of normalisation,” one social media user commented on the video.

Comments on social media ranged from sympathy with the tourists to criticism of their decision to travel to Israel for tourism despite the Israeli occupation and the mistreatment of Palestinians.

“Dezionification of the UAE is needed,” one user tweeted.

This is how Israel treats Arabs no matter who they are. 2 Emirati tourists were brutally arrested and humiliated by Israeli police after suspecting they are shooters. Hope those Emiratis learned what’s it like to live under the occupation they legitimize.
pic.twitter.com/cYmT5O1d3A

In the video, one of the Emirati nationals can be heard saying “my name is Adel, I came with the embassy” as he was being questioned and handcuffed.

The event was unsurprising to many as Israeli security forces widely use ethnic profiling as a screening method against Palestinians. It was however the first incident of racial profiling of Emirati citizens since Israel and the UAE signed the normalisation agreement in 2020.

Since then, the two countries have signed a series of deals to boost cooperation in different fields, including tourism, trade, security and healthcare.