The Tesla magnate said he doesn’t care about popularity, but doesn’t want “millions of people to die” 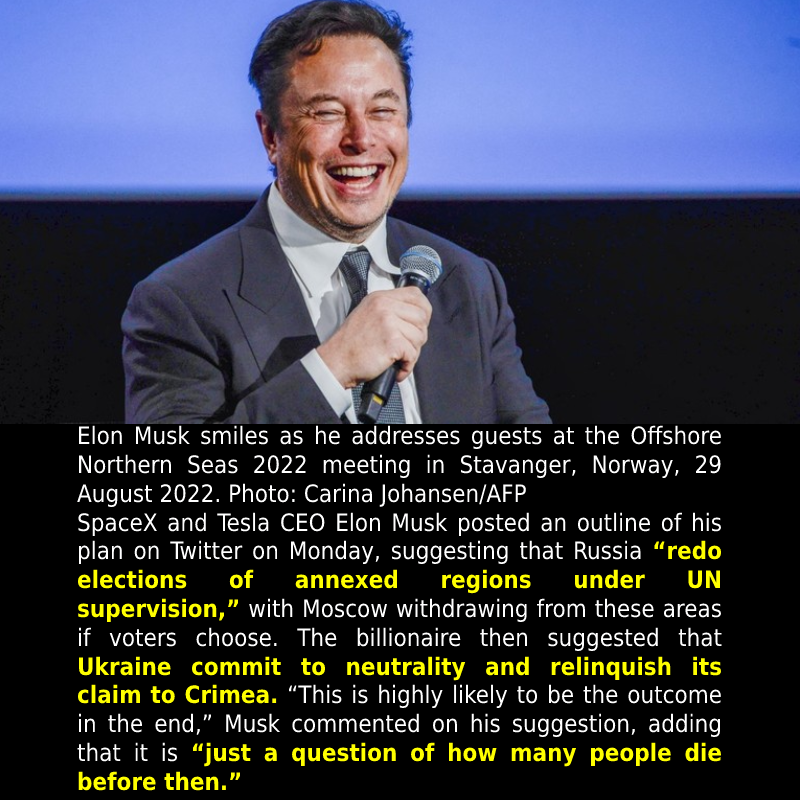 Tesla and SpaceX CEO Elon Musk has defended a controversial peace plan he proposed for Ukraine which would see Kiev make some concessions to Russia. Musk was hounded on Twitter by pro-Ukrainian bot accounts and condemned by the Ukrainian government, but insists that his idea is preferable to the deaths of “millions of people.”

Musk posted his peace proposal to Twitter on Monday, suggesting that Russia hold new UN-supervised referendums in its newly-acquired territories, while Ukraine formally relinquishes its claim to Crimea, guarantees the peninsula’s water supply, and declares itself a neutral country.

A poll accompanying his post showed around 60% of respondents backing the plan, before pro-Ukrainian accounts in the comments summoned an army of trolls to swing the vote in their favor. Musk himself said that the poll was subjected to the “biggest bot attack I’ve ever seen.”

Ukraine’s parliament responded to the suggestion with a simple “no,” while Kiev’s outgoing ambassador to Berlin, Andrey Melnik, said that his “very diplomatic reply” would be “f**k off.”

Musk then ran a fresh poll, asking whether “the will of the people who live in the Donbass and Crimea should decide whether they’re part of Russia or Ukraine.” The two Donbass Republics of Donetsk and Lugansk declared independence from Ukraine in 2014 and are currently being formally acceded into Russia, while Crimea overwhelmingly voted to rejoin Russia in 2014 and was accepted the same year.

With Musk claiming that the troll army was still out in force, 44% of respondents said they would deny these people the choice. Musk was again criticized for supposedly hindering the Ukrainian cause, but the billionaire stood his ground.

“You are assuming that I wish to be popular. I don’t care,” he replied to one critic. “I do care that millions of people may die needlessly for an essentially identical outcome.”

“Russia is doing partial mobilization,” he explained. “They go to full war mobilization if Crimea is at risk. Death on both sides will be devastating.” Adding that “victory for Ukraine is unlikely in total war,” he urged the commenter “if you care about the people of Ukraine, seek peace.”

Russia is doing partial mobilization. They go to full war mobilization if Crimea is at risk. Death on both sides will be devastating.

Russia has >3 times population of Ukraine, so victory for Ukraine is unlikely in total war. If you care about the people of Ukraine, seek peace.

Musk’s Ukraine-enraging polls spawned a deluge of jokes and memes on Russian social media channels. With Russian cosmonaut Anna Kikina set to blast off in one of SpaceX’ modules later this month, Russia’s former space exploration chief Dmitry Rogozin remarked on Telegram “that’s what a Russian woman did to an American.”

- Redo elections of annexed regions under UN supervision. Russia leaves if that is will of the people.

- Crimea formally part of Russia, as it has been since 1783 (until Khrushchev’s mistake). 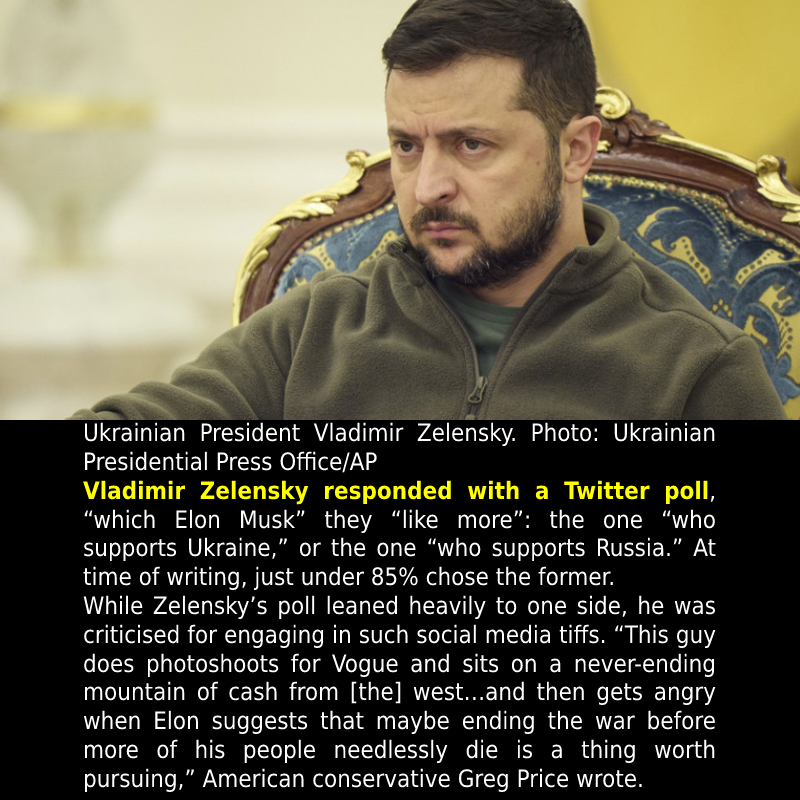