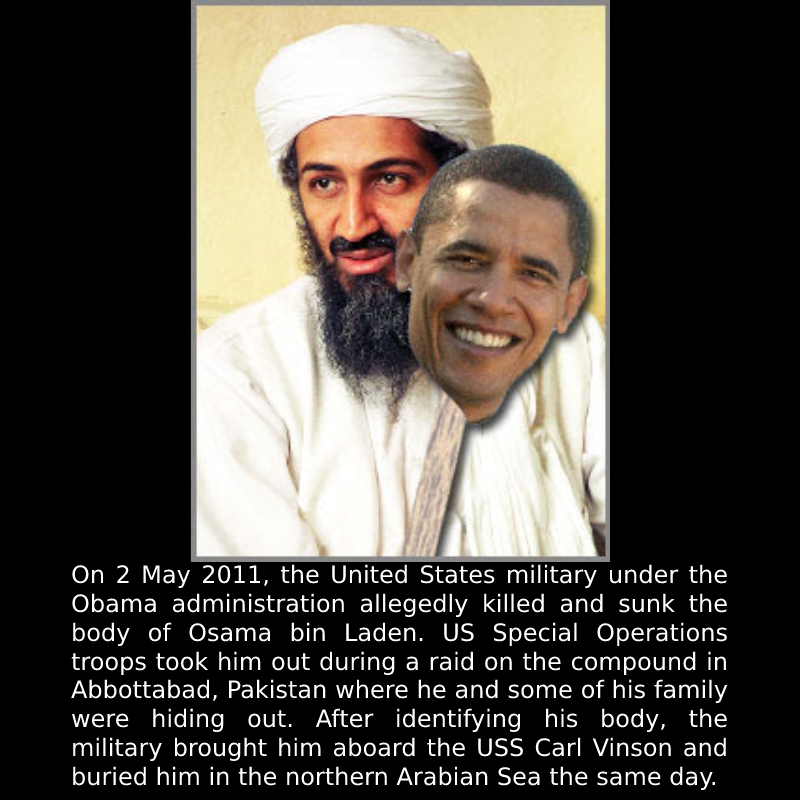 The attack of 9/11 was a false flag operation.

This article was first published in May 2011 following the official announcement of the Obama administration that the Osama bin Laden had been killed.

Obama has pronounced Osama bin Laden to be dead. But according to historical facts and extensive documented evidence, he may never have been alive in the way that the official propaganda has portrayed him. Or alive at all.

Osama bin Laden has been a CIA asset in reality, and a propaganda boogeyman in official fiction.

The official Osama bin Laden narrative, along with “Islamic terrorism” and Al-Qaeda, is a  CIA military-intelligence fabrication designed to provide a pretext for an eternal global war agenda, and to provide an ongoing propaganda pretext for the “war on terrorism”.

The “Militant Islamic Network”, including bin Laden himself, has been, since the Cold War a intelligence network that has been “run” on behalf of Anglo-American interests.

The attack of 9/11 was a false flag operation, planned and carried out by Anglo-American intelligence assets, blamed on “Al-Qaeda”, despite no credible supporting evidence.

On the other hand, evidence abounds concerning the manipulation of terror assets, including bin Laden, by the CIA. This milieu was thoroughly examined by Mike Ruppert in Crossing the Rubicon, in which he concluded:

“Given the degree of documented intelligence penetration of  al Qaeda; the fact that Osama bin Laden had been a CIA asset during the first Afghan conflict against the Soviets; the fact that a number of the so-called hijackers and/or al Qaeda members had been trained in CIA training camps in Chechnya; had fought in CIA/US-sponsored guerrilla conflicts (e.g. in Kosovo with the KLA in 2000), or had received military training at US installations; given all that, it is reasonable to assume that one or more top al Qaeda officials were in fact double or triple agents…”

“Based upon what is known about successful intelligence penetrations for years prior to the attacks of 9/11, Osama bin Laden and al Qaeda could not have sneezed without the CIA or the NSA knowing about it.”

The assertion that bin Laden’s whereabouts have been unknown, that he could have eluded detection for a decade (including the “he’s hiding in caves along the Afghanistan/Pakistan border” and other such fables) was debunked years ago. According to a November 2003 Reuters report, bin Laden had received kidney dialysis in a US military hospital in Dubai two months before the 9/11 attacks, and again on September 10, 2001, according to Pakistani intelligence. These and other reports support the conclusion that Osama bin Laden was not only a CIA asset (one whose whereabouts were more than known), but one who was deathly ill. Other reports over the years suggest that the “mastermind” may have certainly died at some point, even while his image continued to be used incessantly to keep the “war on terrorism” alive.

President Obama’s lying before the cameras was as shameless as the clumsiness of the mainstream corporate media dance surrounding it. At the same time Obama stated in his speech that the killing of bin Laden had taken place “tonight” in a mountain hideout in Pakistan, various reporters on competing networks, citing multiple sources, contradicted Obama, stating that bin Laden was killed a week ago in a firefight near Islamabad, and that bin Laden’s body had been tested for DNA ever since. This conflict alone raises enough doubt to throw this new official story into the question. In the coming days, there will undoubtedly be more holes revealed.

Seasoned observers have said for years that Osama bin Laden—the mythic figure— would elude capture as long as the Anglo-American elites needed to continue the current course of war in the Middle East and Central Asia. He would never be captured, absolutely never be put on trial, and would not be “killed” unless political expediency demanded it. The elites, for various reasons, have chosen this hour to end this tired and overused trump card.

The “successful kill” of bin Laden comes at a convenient time. Obama’s popularity has plummeted. His political opponents are threatening to unseat him in 2012. The continued US presence in the Middle East and support for the “war on terrorism” is fragile, weakened by popular protests, and ambivalence among Americans.

The “war on terrorism” narrative, the continuing world war done in its name, will never end. It is clear, however, that some change in course is in the works; at the very least, a tactical shift.

In the meantime,  Barack Obama can now claim to have “finished the job” in Afghanistan, just as he promised to do when elected, and declare himself to be a champion anti-terrorist, a “take-charge” military leader and bastion of justice who has avenged 9/11. Obama will ride this hard for his re-election campaign.

In response to Obama’s victory speech, crowds (of unknown origin) gathered outside the White House chanting “U.S.A.”. Whether this spectacle was staged or genuine is not known. What is known is that the vast majority of the American public remains oblivious to the fact that their own government, Bush/Cheney and Obama administrations alike, have never stopped lying to them about 9/11, the “war on terrorism”, or Osama bin Laden.

On this night, Obama repeated The Big Lie, the biggest one of all.

READ MORE: Selected Articles: The 21st Anniversary of the 9/11 Attack