Opening Address of Tun Dr Mahathir at The Oxford Union

Tun Dr Mahathir Mohamad is the first Malaysian and democratically elected ASEAN leader to be invited to speak at The Oxford Union, this is his second invitation.

So, I would then leave it to you to ask questions afterwards. But in the meantime, I would like to point out that we live in troubled times. There are so many things happening that are bad for the whole world. First, we have the climate change. The climate change can result in a lot of disasters for people and we, at the moment, we have not found ways on how to deal with this climate change. 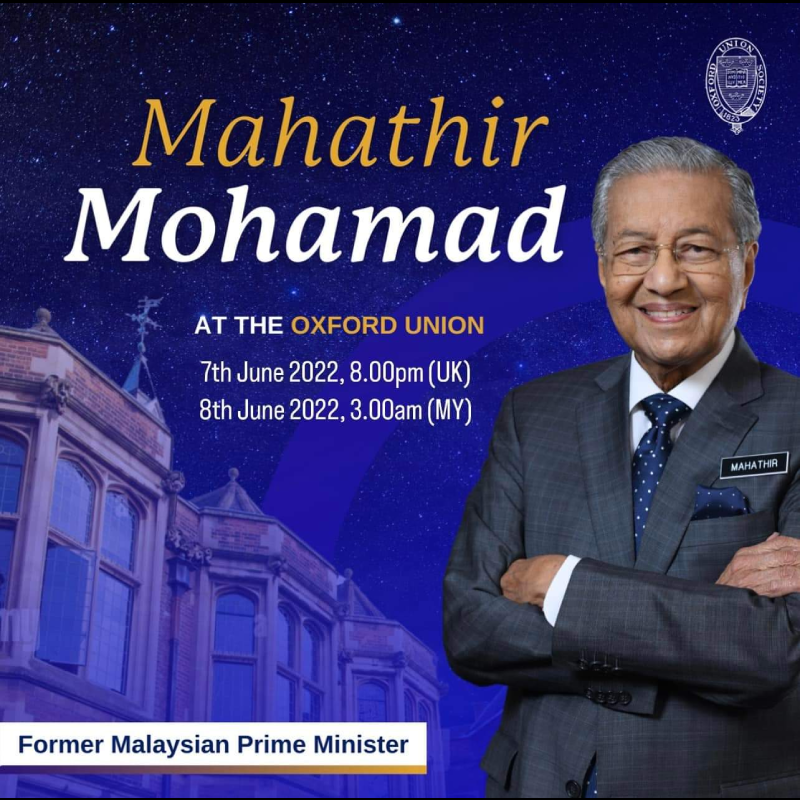 I would like to point out that in Malaysia we have problems with our neighbours, with Indonesia, with Singapore. Well, we decided to go to the courts, the International Court. And the court decided that one rock belong to Singapore and not to us. That’s okay, it’s only a rock. But two islands belong to Malaysia instead of Indonesia. But there is no war, no damage, no killing but like civilised people we have the rule of law and we obey the rule of law by going to the courts to settle our problems.
I hope that some lessons may be derived from these experiences of Malaysia that despite being a multiracial country, Malaysia is relatively stable and peaceful, able to develop and when we have problems with our neighbours, we resolve those problems through negotiation, arbitration or going to a court of law so that we don’t do damage to each other, we don’t kill each other and yet we solve the problems that arose because of overlapping claims of territories.
I am told that I should speak for about ten minutes. I think my 10 minutes are up and I need to answer questions from the moderator as well as from the audiences and I hope I can answer those questions.
Thank you.
The Oxford Union
7 June 2022
[Transcribed Opening Address by Tun Dr Mahathir bin Mohamad]
Tags:CriminaliseWarEnergisePeaceOxfordUnionPGPFPresidentTunDrMahathirMohamad
previousOpen Letter To Washington Report On Middle East Affairs. PGPF received an email …
nextOpening Address of Tun Dr Mahathir at the Oxford Union. Tun Dr Mahathir Mohamad…