Palestinians have a legal right to armed struggle 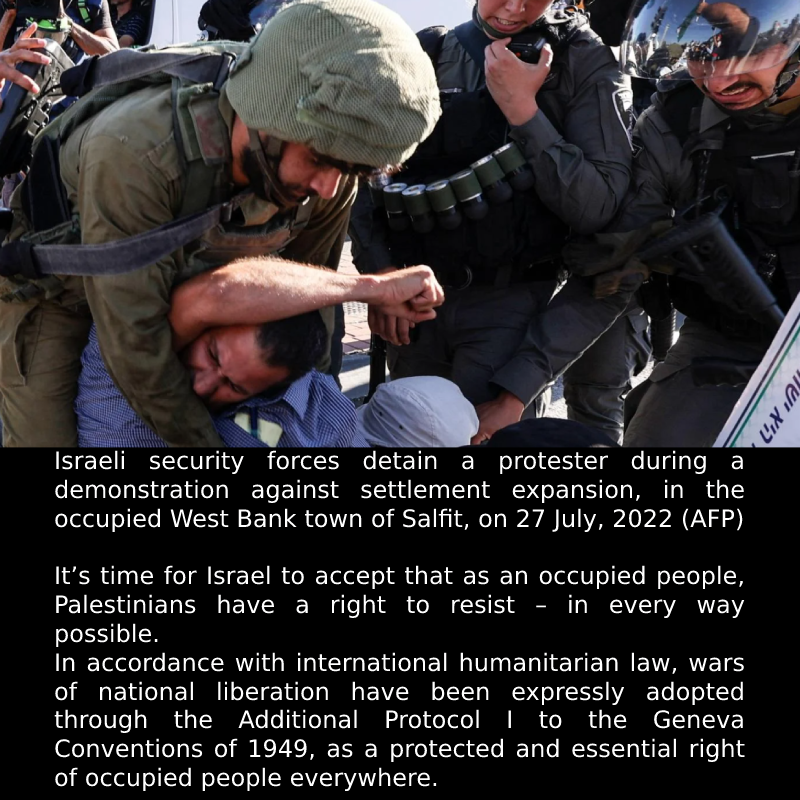 Despite what international law says, the Israeli public has internalised the notion that, by definition, there is no legitimate Palestinian struggle for national liberation.

It is doubtful if more than a handful of Jews in Israel could tell you accurately how many raids the Israeli army conducted last week in Palestinian cities in the West Bank, the number of arrests they made, or the number of people they killed.

At the same time, it is doubtful if there were more than a handful of Israelis who had not heard of the shooting incident on a soldiers’ bus in the Jordan Valley, on Sunday 4 September.

A Palestinian shooting at Israeli soldiers – as opposed to Israelis shooting at Palestinians – is not just an alarming “man bites dog” story that reverses the usual order, demanding extensive reports; in all of those reports, the event was defined as a terror attack and the Palestinian shooters as terrorists.

Not a word about how the shooting targeted soldiers of an occupying army and occurred on occupied land.

The Israeli media has a key role in shaping public consciousness to serve the establishment’s propaganda machine, while keeping the Israeli public thoroughly ignorant of the most basic facts.

The Israeli public, in general, has completely internalised the notion that, by definition, there is no legitimate Palestinian struggle for national liberation.

As with the thorough erasure of the 1949 armistice line, also known as the Green Line, from Israeli consciousness – to the point that the mere mention of its existence by the Tel Aviv municipality provokes threats from the Ministry of Education – so too the consistent labelling of any Palestinian struggle as terrorism obscures the important distinction under international law between an action targeting combatants and one directed against civilians.

The fact is that international law recognises the legitimate right of a people to fight for its freedom, and for “liberation from colonial control, apartheid and foreign occupation by all the means at its disposal, including armed struggle”, as confirmed, for example, by a resolution of the UN General Assembly in 1990.

The use of force to achieve liberation is legitimate. The manner in which force is used is governed by the laws of war, the main purpose of which is to protect uninvolved civilians on both sides.

The Jordan Valley shooting did not target civilians, and cannot be considered a terrorist act. It was an act of armed resistance against an occupying power, on occupied land.

The Jordan Valley shooting did not target civilians, and cannot be considered a terrorist act. It was an act of armed resistance against an occupying power

The Israeli regime and its dutiful echo, the Israeli media, treat every action against occupation forces on occupied land exactly as if they were actions targeting civilians in the heart of Tel Aviv: as terrorist acts perpetrated by terrorists.

This conflation not only negates a legal or moral basis for the act; it is also contrary to the interests of Israel’s citizens.

The relevant laws of war are designed first and foremost to protect civilians who are not participants in the cycle of violence and to limit that violence to actual combatants.

Israel, however, recognises no such category of Palestinian combatants; from Israel’s standpoint, any resistance, even nonviolent resistance, to its occupation and oppression poses a danger to security that is easily recognised as terror, as when Israel recently declared the six most prominent Palestinian NGOs to be terror organisations.

This is a two-way distortion by Israel. Just as it treats every Palestinian action, even those directed against soldiers, as acts of terrorism, so too does Israel paint any Israeli action taken against Palestinians as legitimate, even when those Palestinians are civilians.

For an especially outrageous example of this policy, consider the final conclusions published by the Israeli army regarding the fatal shooting of journalist Shireen Abu Akleh. The army initially claimed that Abu Akleh was killed by Palestinian gunfire, a blatant lie that was exposed by a series of media outlets that examined the evidence minutely. The revised version the army later published is also far from congruent with the evidence. 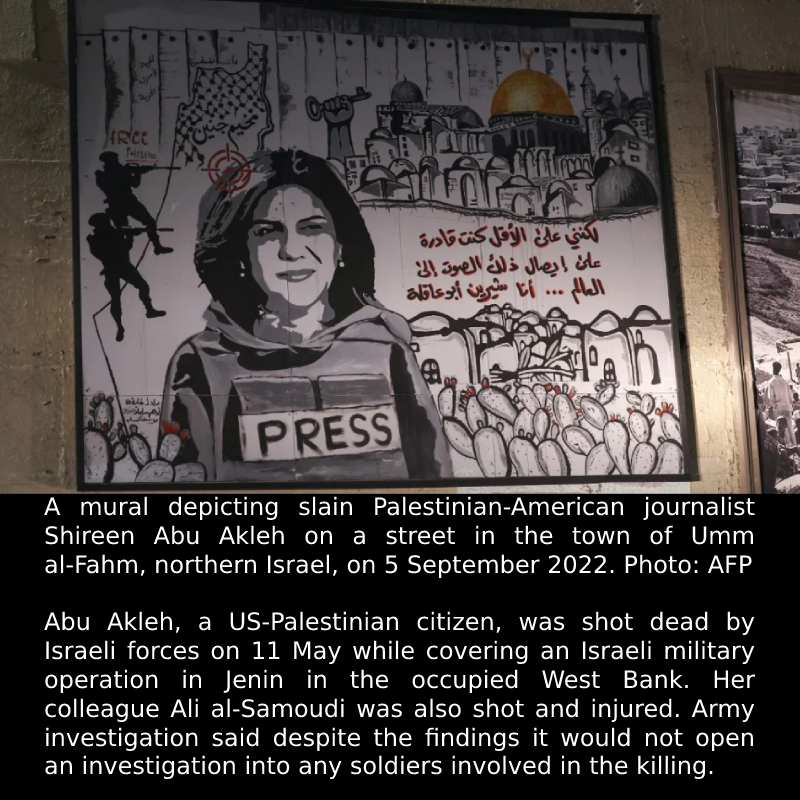 The Military Advocate General announced that no investigation would be opened, despite the chilling admission that Abu Akleh, wearing a vest clearly identifying her as a journalist, was shot to death by a soldier using a sniper rifle’s telescopic sight – which magnifies the target by a factor of four.

Equally disgraceful was the Israeli response to the very minor American request to “take another look at” the army’s open-fire procedures in the West Bank.

Not that the army will stop murdering innocent people, God forbid, nor that it will stop the endless invasions of West Bank cities, the mass arrests, the midnight abductions of children from their beds – just that it will exert itself a bit more, if it’s not too difficult, to avoid any more such cases.

The mighty United States prefers not to find itself mired in such cases because the victim happens to hold American citizenship, as was the case with Abu Akleh.

Even the courtesy of paying lip service to this minor request was not forthcoming from Israel, which responded with typical brutality. Prime Minister Yair Lapid hastened to tell the Americans that “no one will dictate open-fire regulations to us”.

Defence Minister Benny Gantz, in the same spirit, stated: “The chief of staff, and he alone, determines and will continue to determine the open-fire policies.”

In other words, Israel put the Americans, indeed the entire world, on notice: no one will tell Israel how many, who, when, where or how we will kill. And there the matter ends, until the next time.

Orly Noy is the chair of B’Tselem – The Israeli Information Center for Human Rights in the Occupied Territories.