Putin expands fast-track Russian citizenship to all of Ukraine 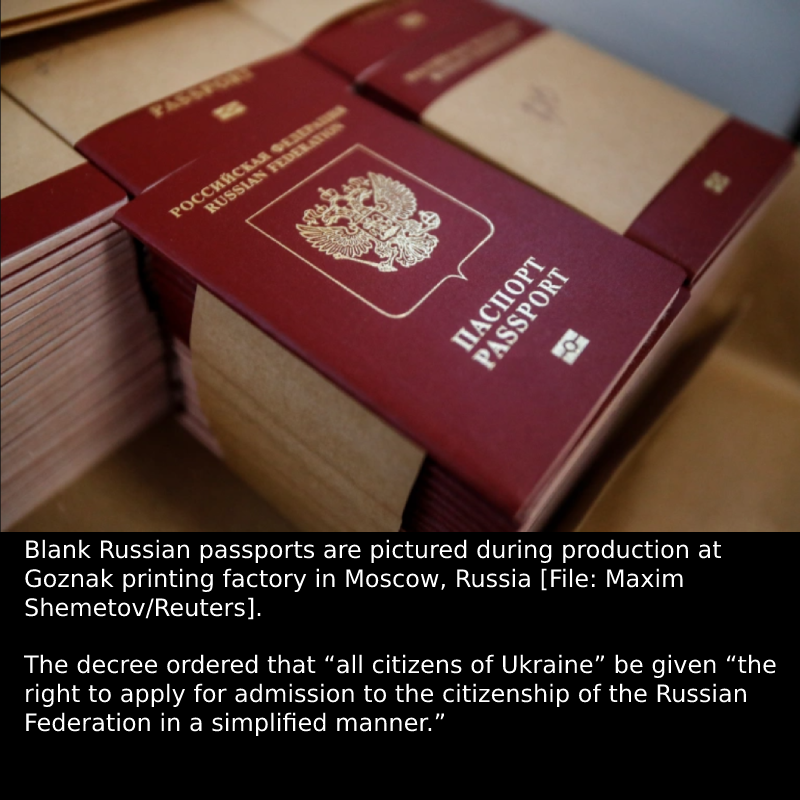 Applicants are not required to have lived in Russia or pass a Russian language test.

Russian President Vladimir Putin has signed a decree expanding a fast track to Russian citizenship to all citizens of Ukraine, a document published on the government’s website showed.

Until recently, only residents of the self-proclaimed breakaway territories of the Donetsk People’s Republic (DPR) and Luhansk People’s Republic (LPR) in eastern Ukraine, which Russia seeks to “liberate” from Kyiv’s control, as well as the Russian-occupied regions of Kherson and Zaporizhia, were eligible for the simplified procedure.

Between 2019 – when the procedure was first introduced for the residents of Donetsk and Luhansk – and this year, more than 720,000 residents of the rebel-held areas in the two regions – about 18 percent of the population – have received Russian passports.

In late May this year, three months after Russia invaded Ukraine, the fast-track procedure was also offered to residents of the Zaporizhia and Kherson regions. A month ago, the first Russian passports were reportedly handed out there.

The decree on Monday ordered that “all citizens of Ukraine” be given “the right to apply for admission to the citizenship of the Russian Federation in a simplified manner”.

Ukraine condemned the decree as a violation of Ukraine’s sovereignty.

“The mentioned decree is another encroachment on the sovereignty and territorial integrity of Ukraine, incompatible with the norms and principles of international law,” the foreign ministry said.

“Ukrainians do not need Putin’s citizenship and attempts to impose it by force are doomed to failure,” Foreign Minister Dmytro Kuleba said.

In May, Putin signed a decree simplifying the process for residents of Ukraine’s Russian-occupied Kherson and Zaporizhia regions to acquire Russian citizenship and passports.

The decree marked a further step towards “Russification” of the two regions, where Moscow’s war in Ukraine has enabled it to establish a continuous land bridge linking Russia to the Crimean Peninsula, which it seized from Ukraine in 2014.

At the time, Kyiv said the plan was a violation of international law and accused the Kremlin of “criminal” behaviour.

“The illegal issuing of passports … is a flagrant violation of Ukraine’s sovereignty and territorial integrity, as well as norms and principles of international humanitarian law,” the Ukrainian foreign ministry said in a statement then.

Applicants are not required to have lived in Russia and do not need to provide evidence of sufficient funds or pass a Russian language test.