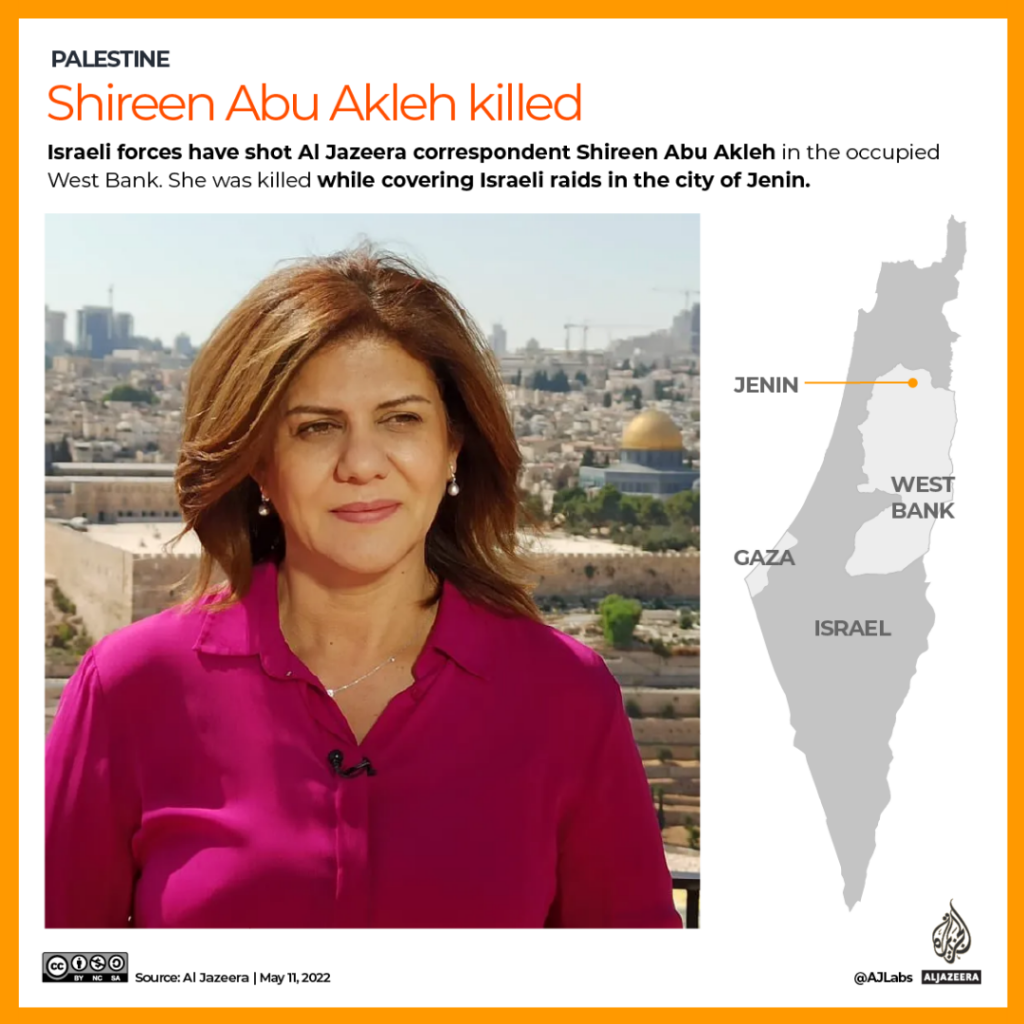 Israeli forces shot Shireen Abu Akleh in the head while she was on assignment in Jenin in the occupied West Bank.

She was hit by a live bullet on Wednesday while covering Israeli raids in the city of Jenin and was rushed to the hospital in critical condition, according to the ministry and Al Jazeera journalists. Abu Akleh was wearing a press vest when she was killed.

She was declared dead at the hospital, the ministry said.

Another Al Jazeera journalist, Ali Samoudi, was also injured after being shot in the back. He is now in a stable condition, and said that there were no Palestinian fighters present when the journalists were shot, directly disputing an Israeli statement that referenced the possibility.

“We were going to film the Israeli army operation and suddenly they shot us without asking us to leave or stop filming,” said Samoudi. “The first bullet hit me and the second bullet hit Shireen … there was no Palestinian military resistance at all at the scene.”

Shatha Hanaysha, a Palestinian journalist who was present next to Abu Akleh when she was shot, also told Al Jazeera that there had been no confrontations between Palestinian fighters and the Israeli army, and said that the group of journalists had been targeted.

“We were four journalists, we were all wearing vests, all wearing helmets,” Hanaysha said. “The [Israeli] occupation army did not stop firing even after she collapsed. I couldn’t even extend my arm to pull her because of the shots. The army was adamant on shooting to kill.”

The circumstances of Abu Akleh’s death are still emerging, but videos of the incident show that she was shot in the head, said Al Jazeera’s Nida Ibrahim.

“What we know for now is that the Palestinian Health Ministry has announced her death. Shireen Abu Akleh, was covering the events unfolding in Jenin, specifically an Israeli raid the city, which is north of the occupied West Bank, when she was hit by a bullet to the head,” Ibrahim said, speaking from the Palestinian city of Ramallah.

“As you can imagine, this is a shock to the journalists who have been working with her.”

Abu Akleh was one of Al Jazeera’s first field correspondents, joining the network in 1997.

The Israeli military said that it had come under attack with heavy gunfire and explosives while operating in Jenin, and that they fired back. It added that it was “investigating the event”.

“Targeting Shireen is a clear targeting of the truth, and [Israel] wants to cover its crimes against the Palestinian people,” said Osama al-Qawasami, Fatah’s spokesman. “Israel wants to send a message to journalists around the world that the fate of whoever wants to cover the truth will be shot and killed.”

Yair Lapid, the Israeli foreign minister, said that Tel Aviv was offering a “joint pathological investigation” into Abu Akleh’s “sad death”. He added that “journalists must be protected in conflict zones”.

Al Jazeera’s offices in the Gaza Strip, which also housed the Associated Press, were bombed by Israeli forces during an offensive a year ago, and Palestinian and international journalists say they have been regularly targeted by Israeli forces in the occupied West Bank and east Jerusalem.

Many in Palestine and abroad took to social media to express their shock and grief.

“Israeli occupation forces assassinated our beloved journalist Shireen Abu Akleh while covering their brutality in Jenin this morning. Shireen was most prominent Palestinian journalist and a close friend,” wrote Husam Zomlot, the Palestinian ambassador to the United Kingdom.

Israeli occupation forces assassinated our beloved journalist Shireen Abu Akleh while covering their brutality in Jenin this morning. Shireen was most prominent Palestinian journalist and a close friend. Now we will hear the “concerns” of the UK govt & the international community pic.twitter.com/M6lKTbceHJ

Those who knew her described her as brave, kind and a voice of the Palestinians.

“Shireen was a brave, kind and high integrity journalist that I and millions of Palestinians grew up watching,” wrote Fadi Quran, an activist at the campaign group, Avaaz.

“In disbelief,” wrote Salem Barahmeh, a Palestinian activist. “We grew up to her reporting on the second intifada. She was our voice. Rest in power and peace. Another day, another tragedy.”

In disbelief. Israeli apartheid forces killed Al Jazeera journalist Shireen Abu Akleh this morning while covering their invasion of Jenin. We grew up to her reporting on the second intifada. She was our voice. Rest in power and peace. Another day, another tragedy. https://t.co/FkaNdCTFUU

Giles Trendle, Al Jazeera’s managing director, said that the network was “shocked and saddened” by the death of Shireen Abu Akleh.

“We have had a history throughout the world but particularly in this region, where we have had tragedies,” he said, calling for a transparent investigation to the killing of Abu Akleh.