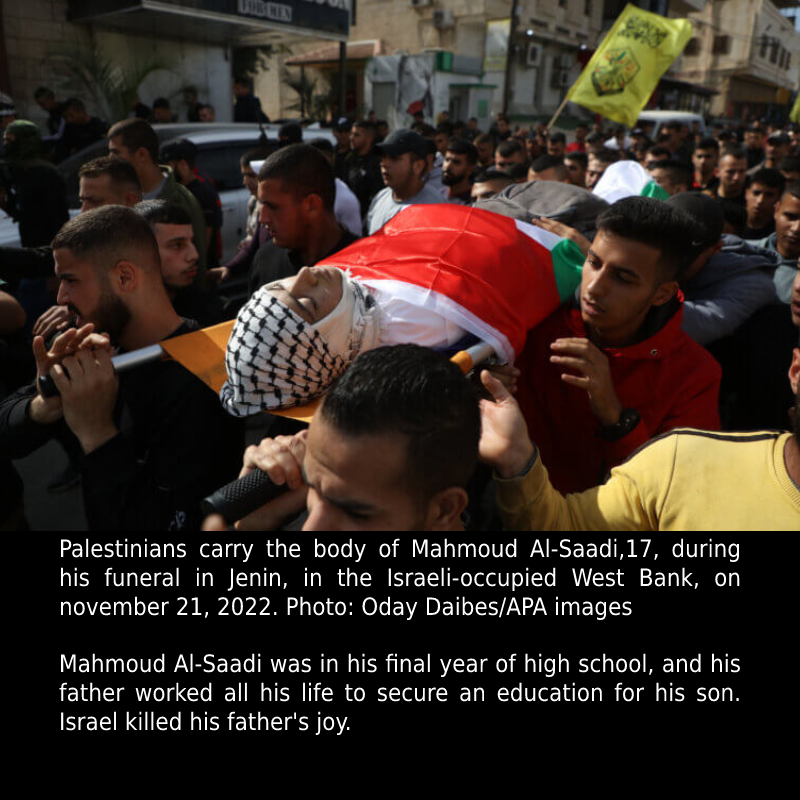 On Monday, November 21, Israeli forces killed a Palestinian high school student from Jenin refugee camp, and injured three others, during a military operation in the city of Jenin, 98 km northwest of Jerusalem.

Mahmoud Al-Saadi, 17, was on his way to Farhat Shihad Boys’ School in Jenin when Israeli forces shot him in the abdomen. Almost an hour later, Al-Saadi succumbed to his wounds at the Ibn Sina public hospital. His father identified him at the hospital before laying him to rest.

Just before 8:00 a.m., a force made up of the Israeli military, border police, and the Shin Bet (internal intelligence) invaded Jenin and made its way towards the home of Rateb Al-Bali, wanted for allegedly engaging in armed confrontations with Israeli military targets.

“Turn yourself in, we know you are here. It’s better for you to turn yourself in, before we topple the house on your head and on everyone in it,” an Iraeli soldier was heard threatening through a loudspeaker. “I am warning you! Come out!”

“We know that you are home and everyone is at home with you,” the soldier’s voice could be heard by everyone in the neighborhood. “Come out and turn yourselves in before we tear down the house on you.”

Injured and afraid for the safety of his family, Al-Bali turned himself in.

The home of Rateb was near Al-Saadi’s school. The search-and-arrest operation, planned by some of Israel’s most elite special operations units, was timed during school hours on a school-day, when children were present.

“His friends thought he was kidding when he yelled that he had been shot,” XX told Mondoweiss on condition of anonymity, in reference to the slain Mahmoud Al-Saadi. Al-Saadi’s classmates, who mistook their friend’s plea for a momentary impossibility, had to dodge the bullets of the Israeli army and ensure the evacuation of their injured peer.

Bleeding from his abdomen, local journalists confirmed to Mondoweiss that Al-Saadi was transferred in a private car as ambulances were unlikely to reach him in time.

One of Al-Saadi’s relatives mentioned in an interview shortly after his burial that Mahmoud’s father had worked all his life “to provide [Mahmoud] with a dignified future and an education.”

“The occupation killed this joy,” he said before breaking into tears.

A heart big enough to embrace the whole camp

More than 202 Palestinians have been killed since the beginning of the year, according to the Palestinian Ministry of Health. Many of those martyred were killed during offensive Israeli military invasions in Palestinian cities and towns meant to quell Palestinian armed resistance against continued settler encroachment.

Palestinian schoolchildren and youth have not been spared the abuse of Israel’s continued military offensive. Many of the killings this year have been of children, many of them killed throughout the course of the Israeli army’s frequent search-and-arrest raids.

As many as 33 children have been killed in this year’s on-going Israeli military offensive, Operation Break the Wave. Just last week, Israeli soldiers riddled a car with bullets when it unsuspectingly drove near a similar search-and-arrest operation in Betunia, killing 14-year-old Fulla Masalma inside the car.

Al-Saadi used to be part of the Jenin Freedom Theater, which issued a statement mourning Al-Saadi’s death.

“A skilled and passionate trainer for our Child and Youth Program, he brought his unique character to this work,” the statement read. “Mahmoud had a promising future ahead of him, and we were excited to see where his work in theatre would lead him.”

Ranin Odeh, who had trained Al-Saadi at the Freedom Theater, also wrote a eulogy for the slain youth.

“Your heart was big enough to embrace the whole camp, its streets and its homes,” the letter read. “I think of you coming to the stage, and joining the workshops to have fun and play. This is what hurts me the most, that the boy with a golden heart is gone. Believe me, the news of your martyrdom hurt my body and brings me to tears.” 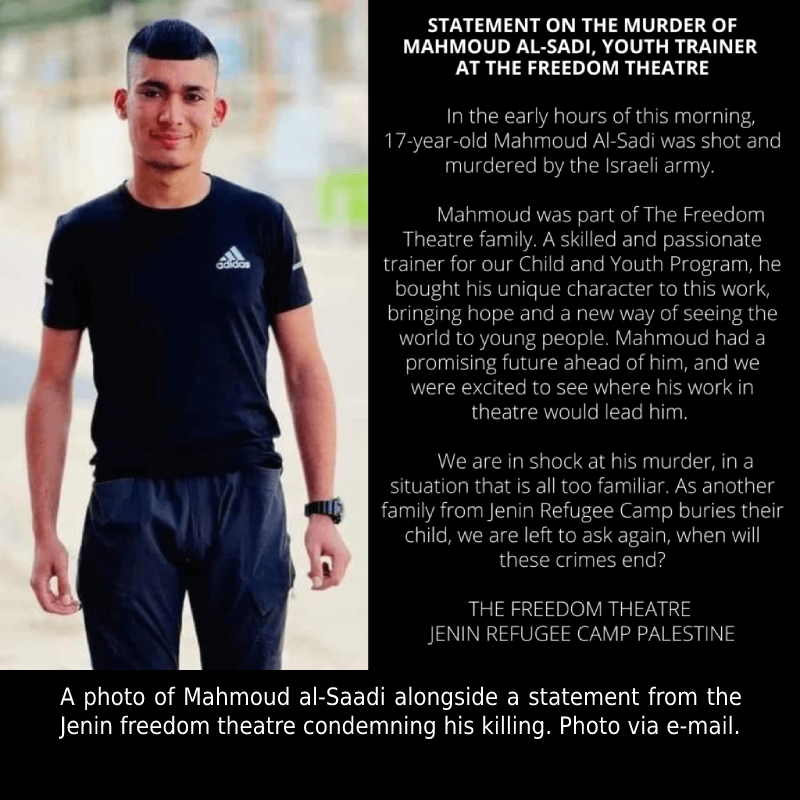