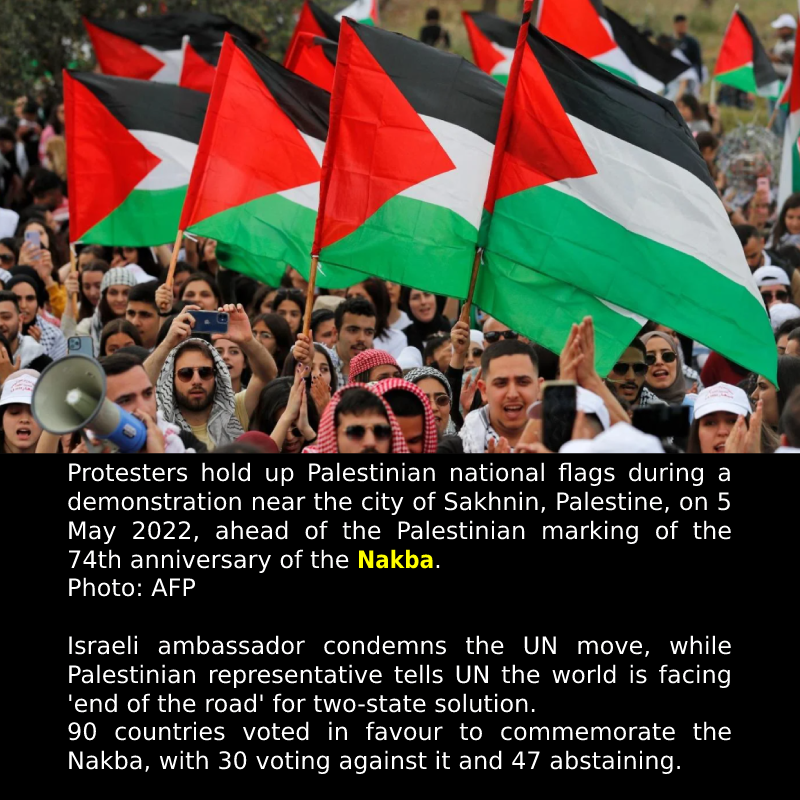 The UN General Assembly has approved a resolution to commemorate the 75th anniversary of the Nakba, a term used to describe the forced displacement of hundreds of thousands of Palestinians in the lead-up to the establishment of the state of Israel in 1948.

Ninety countries voted in favour of the measure, with 30 voting against it and 47 abstaining.

The resolution was one of five that were voted on in the UN on Thursday which related to Israel and Palestine. The UN also voted in favour of renaming a journalism training programme after Shireen Abu Akleh, a Palestinian journalist who was killed by Israeli forces during a raid in the occupied West Bank.

And another adopted resolution called for a “halt to all settlement activities, land confiscation and home demolitions, for the release of prisoners and for an end to arbitrary arrests and detentions”. A final resolution called for Israel to rescind its control over the occupied region of the Golan Heights.

The Nakba resolution includes the organising of a high-level event at the General Assembly on 15 May 2023. 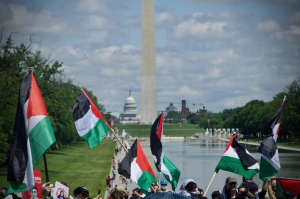 The Nakba, “the catastrophe”, is the name Palestinians give to the massacres and forced expulsion they endured at the hand of Zionist militias in 1948.

Entire Palestinian villages were massacred, with Zionist gangs indiscriminately killing unarmed civilians and burying some in mass graves. The Israeli campaign left an estimated 15,000 Palestinians dead and some 750,000 fleeing their homes to live as refugees.

The raids continued after Israel announced its independence on 15 May 1948. Israel refers to the events of 1948 as the war of independence.

Israel’s ambassador to the UN, Gilad Erdan, condemned the measure’s passage and asked delegates: “What would you say if the international community celebrated the establishment of your country as a disaster? What a disgrace.”

The Israeli diplomat said the passage of the resolution on the Nakba would hinder any chance of a peace deal between Israel and the Palestinian Authority.

Meanwhile, the Palestinian envoy to the UN, Riyad Mansour, warned the UN that the two-state solution was at imminent risk and urged the international body to pressure Israel as well as to grant Palestinians full recognition.

Mansour called on the UN to acknowledge a Palestinian state with East Jerusalem as its capital.

“We are at the end of the road for the two-state solution. Either the international community summons the will to act decisively or it will let peace die passively. Passively, not peacefully,” Mansour told the UN.

“Anybody serious about the two-state solution must help salvage the Palestinian state,” he said. “The alternative is what we are living under now – a regime that has combined the evils of colonialism and apartheid.”

Mansour also slammed the incoming far-right coalition in Israel, led by former prime minister Benjamin Netanyahu, as “the most colonial, racist and extremist government in the history of Israel”.

However, the Palestinian representative also hailed the UN’s request for an advisory opinion from the International Court of Justice (ICJ) on Israel’s occupation of Palestinian lands since 1967.

The comments from both Mansour and Erdan come amid heightened tensions following a spike in Israeli violence against Palestinians in the West Bank this year and a resurgence of Palestinian armed resistance.

Israeli forces and settlers have killed 139 Palestinians, including at least 30 children, in the West Bank this year, making it the deadliest on a monthly average for Palestinians since the UN began recording fatalities in 2005.

Israeli casualties also witnessed a spike in 2022 compared with recent years. At the same time, there has been a steep rise in settler attacks against Palestinians and security forces.

Tor Wennesland, the UN’s envoy to the Middle East, warned on Monday that the tensions were “reaching a boiling point”.