What can the Oslo and Sabra and Shatila anniversaries teach us about the Palestinian struggle? 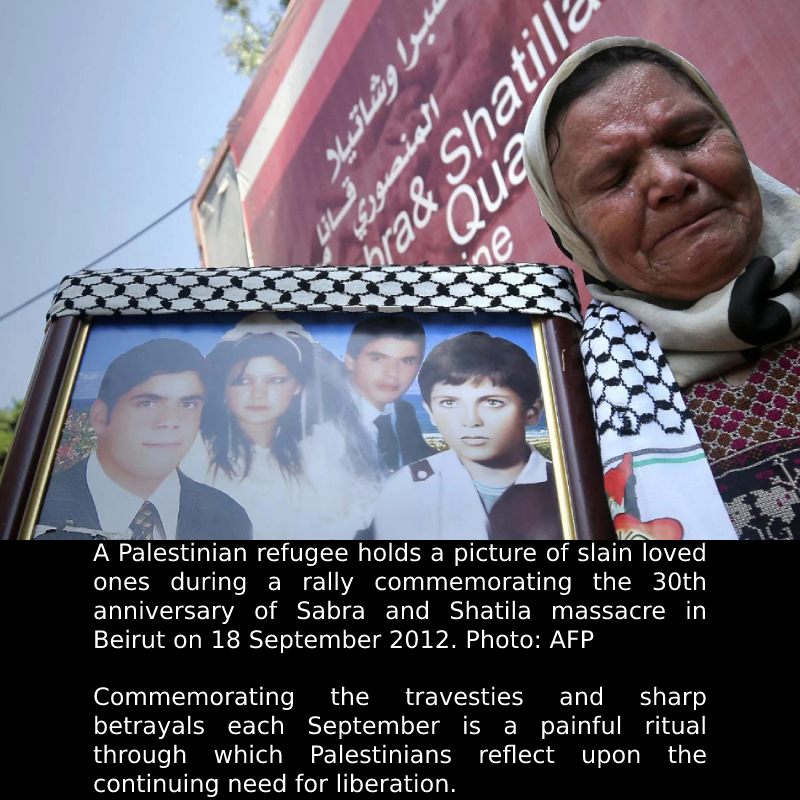 The month of September has come to represent a series of historical devastations for the Palestinian people and their struggle.

Commemoration of the sharp betrayals and travesties contained within these short four weeks is a painful ritual through which Palestinians reflect upon the continuing need for liberation.

Moreover, it is a time to consider the various ways our freedom has continued to be denied and sabotaged by settler-colonial and imperial violence, as well as the crass opportunism and betrayal of the so-called liberation movement.

I read the script carefully. Sadly, I could find no redeeming aspects to what is being lauded as a masterful rendition of a ‘fleeting moment of bright hope’

A case study in betrayal

This past Tuesday, 13 September, marked the 29th anniversary of the signing of the Oslo Accords in 1993. It initiated the so-called “peace process” by which individuals within the modern Palestinian liberation movement laid down their arms in exchange for the personal enrichment of a few. They also held the misguided belief that such capitulation would grant them greater political legitimacy in the eyes of Washington and Eurocentric internationalist bodies. 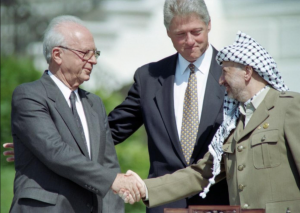 READ MORE: Oslo: A drama that perpetuates falsehoods about the infamous accords

It is an exercise in profound political masochism to reflect upon how much bloodshed was implied in the nauseating handshake between PLO chairman Yasser Arafat and Israeli prime minister Yitzhak Rabin, a documented war criminal, on the White House lawn as a self-satisfied Bill Clinton looked on, beaming.

Reactionary elements within the Palestinian movement ceased armed struggle for nothing but the scant possibility that someday, somehow, Palestinians might achieve a state of their own through bourgeois negotiation.

It is as though the asymmetry of power between coloniser and colonised could be made to simply disappear in the act of gathering, tête-á-tête, at a negotiation table.

The fact that Palestinians have nothing to show, 29 years later, but increasing ghettoisation and unfettered colonisation of Palestinian land; the excising of Palestinian refugees and exiles from political considerations; and repressive violence at the hands of both the Zionist settler-colonial state and the lackeys of the corrupt and thuggish Palestinian Authority is ample demonstration of just how laughable this presumption was from the very outset.

As if this weren’t staggering enough, 16-18 September also marks the 40th anniversary of the Sabra and Shatila massacre. On this day in 1982, Lebanese fascist Phalangist militias descended upon the Beirut neighbourhood of Sabra and the Shatila Palestinian refugee camp and massacred thousands in a genocidal frenzy.

The massacre was supported by Israeli occupation forces – which had invaded and occupied Lebanon in an attempt to drive out the Palestinian resistance – and carried out with the full knowledge and intentional inaction of the United States. 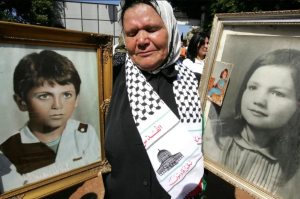 READ MORE: As a medic during the Sabra and Shatila massacre, I saw horror and defiance

The ensuing bloodbath came on the heels of the US’s imperialist “Reagan plan”, a policy by which Washington dismissed the need for Palestinian statehood in favour of successful normalisation with Israel as central to fulfilling UN Security Resolution 242, and demanded that Jordan speak on behalf of the Palestinians in negotiations.

This cruel juxtaposition reveals the overlap between the physical brutality of colonial murder and the political disempowerment that oppressive forces like the settler-colonial US apply to the Global South in pursuance of geo-imperial domination. By MEE staff in Washington

The legacy of Sabra and Shatila, in which victims were killed with impunity, remains four decades later – mirrored by what Israeli colonial authorities did after occupation forces assassinated Palestinian reporter Shireen Abu Akleh. (US President Joe Biden couldn’t even be bothered to learn how to pronounce her name properly.)

But, as reflected in the work of Robert Fisk, the Sabra and Shatila massacre also galvanised a new, oppositional journalistic ethos that challenged the Zionist use of “terrorism” as a pretext for mass slaughter and false accusations of “anti-semitism” against those defending Palestinian and Lebanese people murdered by local fascists with the help of the Israeli occupation forces and a US seal of approval. ​​

The total death toll is presumed to be anywhere from 800 to 2,000 Palestinians and at least 100 Lebanese. However, as historian Rashid Khalidi notes, because the Lebanese Forces abducted many people who were never found, the complete number of victims may never be fully known.

In the aftermath of Sabra and Shatila, journalists for the first time could directly transmit the horrors they confronted on the ground without pressure from their employers. It is in this sense that the massacre created a shift in how reporters and activists challenge the dominant narrative on Palestine. 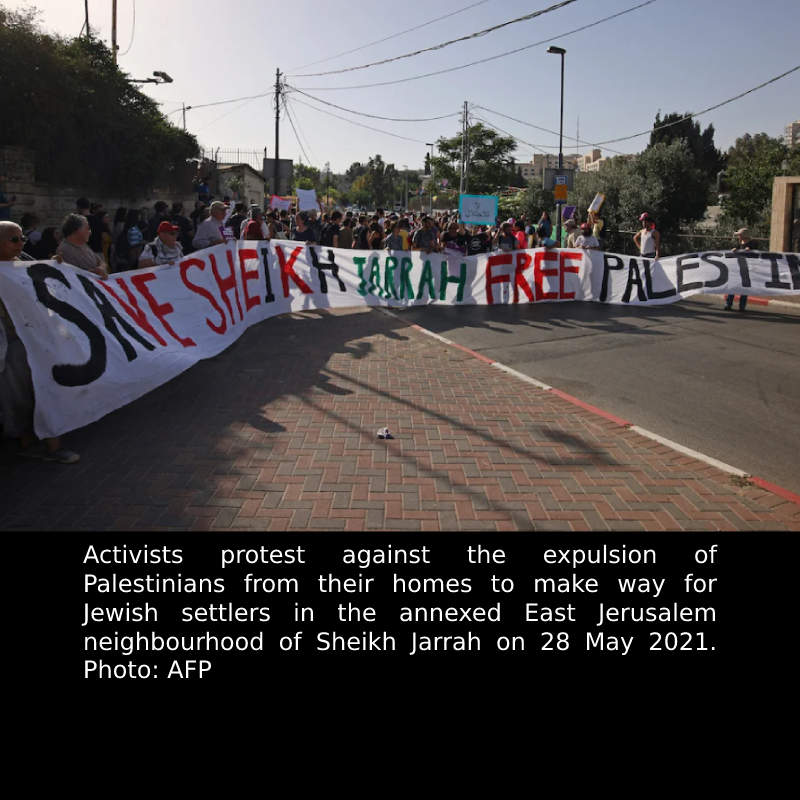 Today, Palestinians are able to bypass mainstream outlets and call attention to Zionist violence through social media, as we saw in May 2021 when activists in Sheikh Jarrah shared their stories and struggles with the world.

Though Silicon Valley tech giants insidiously continue to practise “digital apartheid” against Palestinians, no amount of deletions can ever  take away what the world has already seen.

An end to perpetual mourning

Like Oslo, the legacy of the Sabra and Shatila massacre exposes the violent impossibility of realising justice for the Palestinian people through diplomatic means so long as the settler-colonial character of the Zionist entity and the imperial domination of the US remain intact.

A more accurate terminology for the Oslo framework would be the ‘piece process’, for Palestinian freedom continues to be abrogated and ignored as more and more land is colonised, piece by piece

Honouring the martyrs who have fallen since Israel’s formation as well as by way of the violence legitimised through the inauguration of the so-called “peace process” requires nothing less than the firm commitment to support Palestinian resistance in all forms, including militant armed struggle.

As I have written elsewhere, “a more accurate terminology for the Oslo framework would be the ‘piece process’, for Palestinian freedom continues to be abrogated and ignored as more and more land is colonised, piece by piece”.

As we watch Israeli occupation forces brazenly raid, seize and destroy Palestinian homes and designate any organisation working to ensure that Israel faces accountability for its crimes as “terrorist” organisations, it’s well past time to stop expecting any scrap of benevolence from the imperial US or its ally, the settler-colonial Zionist state.

We need to support colonised Palestinians’ resistance in all forms, precisely because, as a colonised people, Palestinians need to claim by resistance the power and agency that their colonisers and allies would otherwise gladly keep denying to ensure the future of settler-colonial and imperial domination.

We therefore can’t pigeonhole Palestinian political work into spheres that reinforce the legitimacy and oppression of the very nefarious forces that have instituted and continue to support Palestinian death and dehumanisation.

For now, in addition to ongoing observation and necessary lamentation of these shattering nadirs, we need to ensure that their memory is channelled towards support for the future-making resistance by any means necessary of the Palestinians.

This includes those who bravely continue to take up arms, to take to the streets and declaim “enough is enough” in rejecting the ethical bankruptcy of the Oslo Accords, and who refuse any longer to accept that negotiations with and between settler-colonial and imperial powers will yield anything but more death and destruction for their people.

Palestinians deserve far more than perpetual mourning – nothing less than total and absolute freedom and the liberation of our homeland, from the river to the sea.

Tags:FreePalestineOsloSabraShatilaWarCrimes
previousUN officials denounce Israel’s “illegal and unacceptable” war on Palestinian civ…
nextWhat can the Oslo and Sabra and Shatila anniversaries teach us about the Palesti…