Why Arab dictators’ attempts to whitewash Ben-Gvir will fail 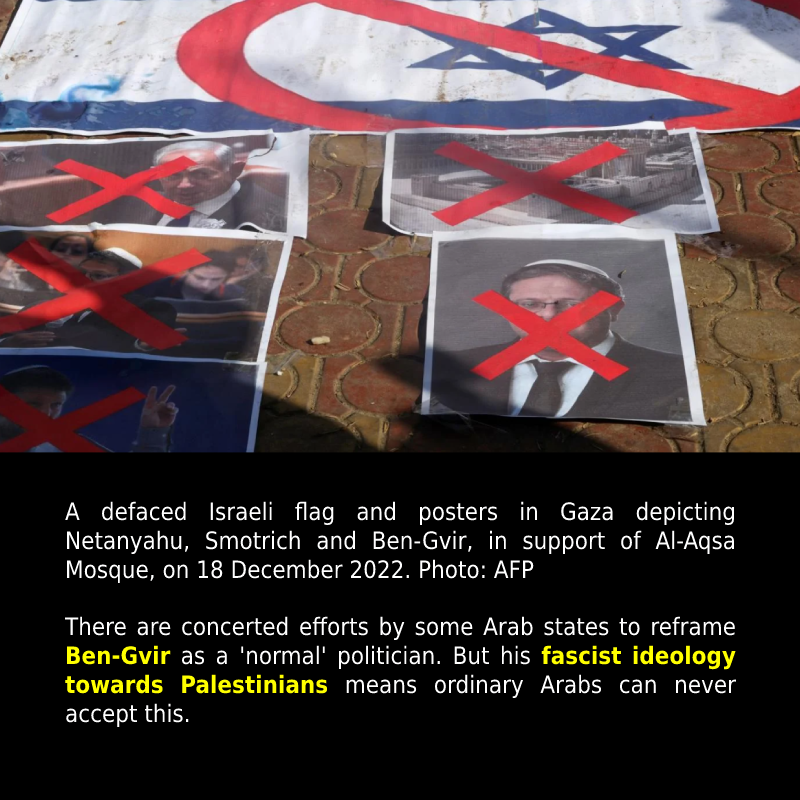 For years, the ultra-extremist far-right Israeli politician Itamar Ben-Gvir was considered too much of a pariah for mainstream politics.

In November’s elections, his bloc won the third-highest number of seats in the Knesset, and many commentators described him as the “kingmaker” of the next Benjamin Netanyahu government.

Ben-Gvir is known for his extreme political views, which include endorsing the late US-born Rabbi Meir Kahane and Baruch Goldstein, who shot dead 29 worshippers at the Ibrahimi Mosque in the occupied West Bank city of Hebron in 1994. In 2007, Ben-Gvir was convicted of racist incitement against Arabs and for supporting Kach, a group on Israeli and US terror lists.

Apart from endorsing Kahane and Goldstein, pictures of whom were seen hanging in his living room during a TV interview, Ben-Gvir has another shockingly racist manifesto, which he has expressed unapologetically in that same interview, with Israel’s Channel 13.

He said that Israel must write off the Palestinian Authority and that Palestinians in the West Bank must return to life under the Israeli occupation, without the right to have Israeli IDs (the blue IDs) or health insurance.

According to Ben-Gvir, they would not have the right to vote and should manage their lives in their communities without the Palestinian Authority. He insisted that he would annex all the settlements in the West Bank and some areas from Hebron to the Israeli state.

According to Ben-Gvir, Palestinians would not have the right to vote and should manage their lives in their communities without the PA.

The “transfer” of Palestinians is at the core of Ben-Gvir’s ideology. He stated in the interview that Israel must establish an immigration ministry to “encourage” Palestinians to leave their homes. This ministry would encourage (read expel) any Palestinian, in the West Bank or Israel, who “hated or did not believe in the Israelis” to leave.

Throwers of stones or Molotov cocktails would have to serve their time in prison and then, on release, would be transferred to European countries. In the same interview, he refused to give the Palestinians from the West Bank the right to live in Israel.

He insisted that he wanted to expel Arab and far leftist members of the Knesset, such as Ahmad Tibi and Ofer Cassif, and even some Jews who didn’t support Israel, such as members of the Neturei Karta movement. He also wants to build a “temple” beside Al-Aqsa Mosque and divide daily access at Al-Aqsa between Muslims and Jews.

Despite the right and often far-right nature of Israeli politics over the decades, Ben-Gvir’s fascism was considered too extreme an ideology by mainstream politicians.

As such, he started a public relations campaign in order to open a path for himself towards entering the Israeli political realm. While he continued endorsing Kahane, he tried to distance himself from the “transfer” ideology. Following his surge in the latest election, many Israeli and US news sources started whitewashing Ben-Gvir, using a different language when describing his views.

He became a popular guest on Israeli TV programmes, including cookery shows. Some Israeli commentators described him as a “normal politician”, while Labor party leader Merav Michaeli carped that Ben-Gvir had been attempting to portray himself as “a cuddly care bear”.

James North, writing for Mondoweiss, said that US newspapers started using a different tone in order to “sanitise” Ben-Gvir after his triumph in November’s elections. 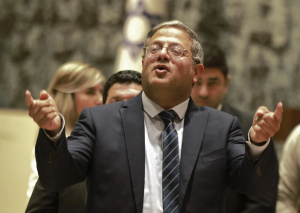 What Israeli generals are really worried about is how little will change when two ultra-nationalist, religious settlers are put in charge of the occupation.

However, the worst whitewashing of Ben-Gvir came from Arab dictators. The United Arab Emirates ambassador in Tel Aviv met Ben Gvir at a ceremony marking the 51st anniversary of UAE independence day. Ambassador Mohamed al-Khaja later met the other big ultranationalist winner in the November elections, the leader of the Religious Zionist party Bezalel Smotrich, who is Ben-Gvir’s political partner and also holds fascist views against Palestinians.

Although UAE Foreign Minister Abdullah bin Zayed warned Netanyahu in October not to include Ben-Gvir or Smotrich in his next government, the Gulf state seems happy to have normalised relations with a government that will have both of them.

The Emirate’s coordination with this Israeli administration is not limited to Tel Aviv or Abu Dhabi. It is also ongoing in Washington, where the two countries’ ambassadors met the potential Republican candidate for the next presidential election, Ron DeSantis, and discussed the Abraham Accords.

On 5 December, officials from Jordan, Egypt, Sudan and Bahrain held a meeting with Israeli representatives in Morocco and discussed “education and coexistence”. It’s business as usual between these countries and Israel, even though the next Israeli government will contain two ministers who hold a fascist ideology towards Palestinians in the West Bank and Israel.

Perhaps the worst aspect of these attempts to whitewash Ben-Gvir is that he is a potential leader of Israel in the coming years. His political surge is reminiscent of the rise of Avigdor Lieberman, the far-right politician who became deputy prime minister and finance minister, or Netanyahu himself, the longest-serving Israeli prime minister.

But the whitewashing of Ben-Gvir and Israel by Israeli and western newspapers and Arab states will fail, and here’s why.

Firstly, four decades after the signing of the Camp David Accords, most Arab nations still refuse to normalise relations with Israel. The coming Israeli fascist government will make it even more difficult for Arab regimes to sell the idea of normalisation to their people.

There remains a strong consensus among ordinary Arab people that normalisation with Israel is unacceptable. For two years since the Abraham Accords were signed, the UAE and Bahrain have tried to make normalisation with Israel not only the official position, but also claim it’s what the people want. Videos that emerged in Qatar during the World Cup showing Arab fans and players holding Palestinian flags and refusing to talk with Israeli TV presenters are proof that they failed.

Ben-Gvir’s focus on Al-Aqsa Mosque, with his plans to divide it between Jews and Muslims and build the “temple” close by, will only undermine the attempts to whitewash him, with Al-Aqsa being of crucial importance in Palestine and the whole Arab and Muslim world.

Since 1967, all Israeli attacks or provocative behaviour around Al-Aqsa have created significant tension inside Jerusalem, Palestine and all Arab and Muslim countries. The last Israeli aggression there in 2021 caused unrest in all Palestinian and Israeli cities, and a war between Gaza and Israel.

Ben-Gvir’s politics will also meet resistance from European and some Arab countries, because his plan to transfer Palestinians to European or Arab states would cause problems for those host countries.

European countries are already seeing rising internal tension because of immigration, while Arab countries that share a border with historical Palestine – and especially Lebanon – already have tensions because of the presence of Palestinian refugees. These countries will not accept more displaced people.

Given that Ben-Gvir and Israeli fascism is a problem for Palestinians, other Arab countries and European nations, too, any attempts by Arab governments to whitewash him and his dangerous ideology are doomed to fail.