Gaza Freedom Flotilla To Sail in 2023 To Challenge the Illegal, Immoral and Inhuman Israeli Blockade of Gaza 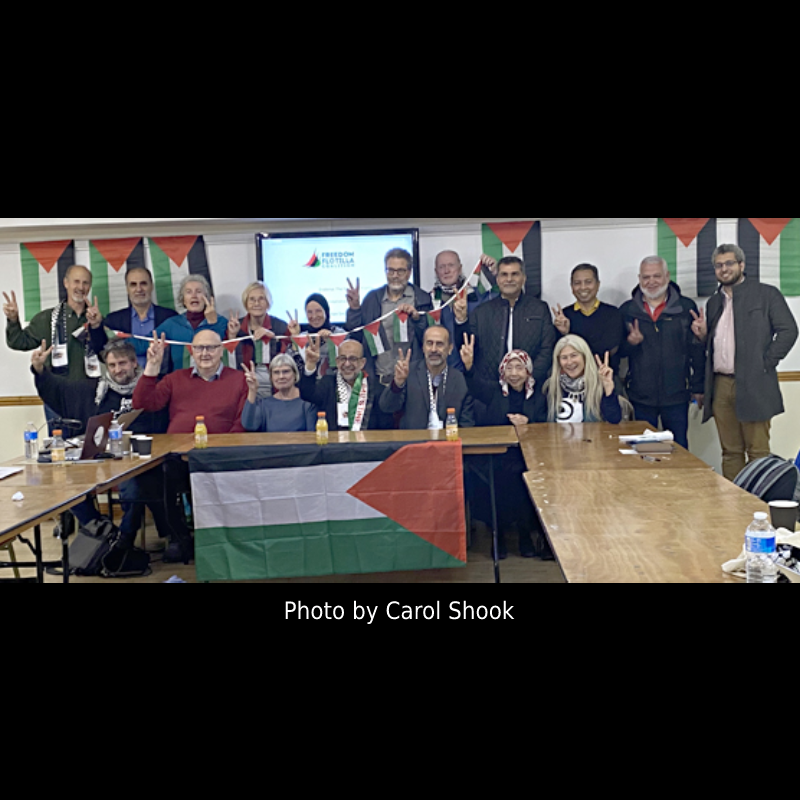 After a pause due to the global pandemic, the Gaza Freedom Flotilla Coalition (FFC) is set to resume its sailing to challenge the illegal, immoral and inhuman Israeli blockade of Gaza.  The last sailing of the flotilla was in 2018. The 2020 sail was postponed due to the COVID pandemic that closed many European ports.

Members of the 10 national and international organization campaign coalition met in London November 4-6, 2022,  and made the decision to resume sailing in 2023.  Representatives of member campaigns from Norway, Malaysia, US, Sweden, Canada, France, New Zealand, Turkey and the International Committee for Breaking the Siege of Gaza) met in-person and by zoom.  Other members of the coalition are from South Africa and Australia.

U.S. Boats to Gaza campaign was represented in London by Ann Wright, Kit Kittredge and Keith Mayer.  Ann Wright stated during press availability in London that: “Despite international condemnation the violent attacks on Palestinians in Gaza, the West Bank and Jerusalem, the Israeli government continues to turn a blind-eye to settler, police and military brutal violence against Palestinians, including children and journalists.  The refusal of U.S. government to place sanctions on the Israeli government for its blatant disregard for the human and civil rights of Palestinians is another example of U.S. administrations’ support for the state of Israel no matter what criminal acts it commits against Palestinians.”

The goals of the Gaza Freedom Flotilla coalition remain full human rights for all Palestinians, and in particular, freedom of movement within historic Palestine and the right of return

“In light of the worsening political situation in apartheid Israel and the increasingly brutal repression in occupied Palestine, we are reaching out to other parts of the solidarity movement to work together towards our common goals. This work includes amplifying Palestinian voices, especially those from Gaza, and supporting our civil society partners, like the Union of Agricultural Work Committees, which represents farmers and fishers in Gaza. The UAWC, along with other Palestinian civil society organizations, has been unjustly smeared and designated by the Israeli occupation in an attempt to undermine their important roles in documenting human rights violations and building resilience in Palestine. While some of our partner organizations are actively involved with important programs addressing the most urgent needs of Palestinian children traumatized by the blockade and murderous Israeli attacks on Gaza, we recognize that a lasting solution requires an end to the blockade.”

The statement continued: “Solidarity movements are under attack in Palestine and around the world. Our response must reflect and amplify the urgent pleas from our civil society partners to end the blockade of Gaza. At the same time, we also work to end the media blockade by exposing the brutal reality of occupation and apartheid.”

“As our predecessors in the Free Gaza Movement said when they began these challenging voyages in 2008, we sail until Gaza and Palestine are free,” the Freedom Flotilla coalition statement concluded.

Ann Wright served 29 years in the US Army/Army Reserves and retired as a Colonel.  She was a US diplomat for 16 years and served in US Embassies in Nicaragua, Grenada, Somalia, Uzbekistan, Kyrgyzstan, Sierra Leone, Micronesia, Afghanistan and Mongolia.  She resigned from the US State Department in 2003 in opposition to the US war on Iraq.  She has been a part of the Gaza Flotilla community for 12 years and has participated in various portions of five flotillas.  She is the co-author of Dissent: Voices of Conscience.