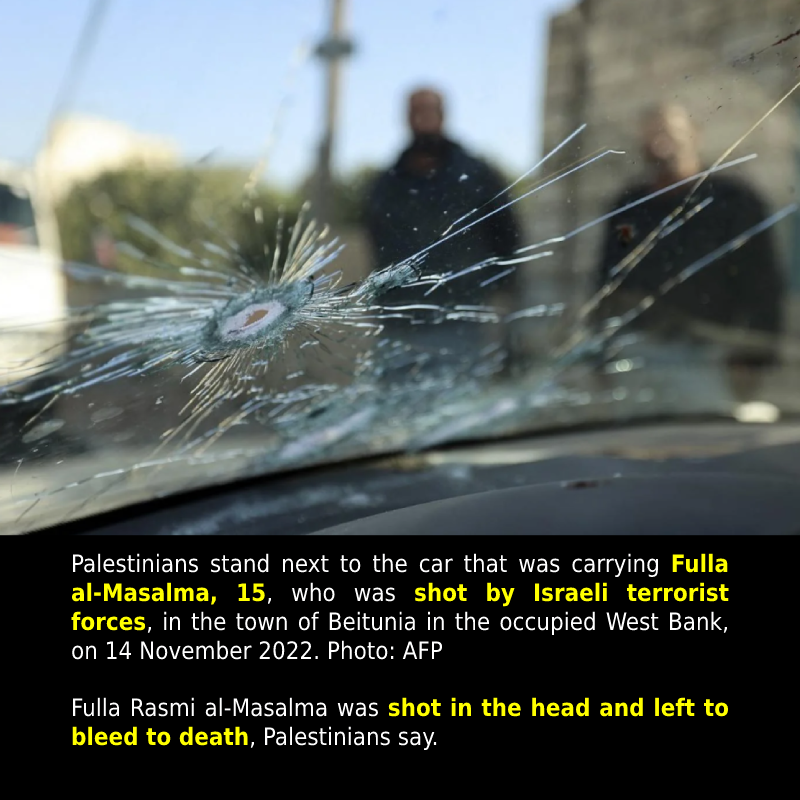 Israeli forces shot dead a Palestinian girl on Monday in the occupied West Bank town of Beitunia, a day before her 16th birthday, the Palestinian health ministry said.

Fulla Rasmi al-Masalma was shot in the head by Israeli troops during an army raid in Beitunia, west of Ramallah.

She was the passenger in a car with another person who was wounded in the shooting.

‘When the soldiers saw the car, they didn’t wait a single moment before shooting’

The Israeli military said soldiers shot at a “suspicious” vehicle as it accelerated towards them and did not heed their call to stop.

Eyewitnesses refuted the Israeli claim and said Masalma was denied medical attention, according to Ahmed Faraj, a spokesperson from the Beitunia municipality.

Faraj said there was “no way” the pair could have known there was a raid going on, and that they stumbled upon the soldiers by accident.

“How could they know there were soldiers on that street? The military should have just stopped the car, but they shot at them without hesitation, not even checking to see who was inside. There was no warning shot,” Faraj told MEE.

“They were shooting to kill, not to make them stop.”

Faraj said the 15-year-old was denied medical attention and left to bleed for nearly 25 minutes, according to security footage and witness testimony.

Israeli forces returned her body to the Palestinian ambulance service at approximately 6:30am in the morning. The wounded person who was in the same car is in Israeli custody.

‘Kill for the sake of it’

Israeli forces have long been criticised for their “shoot-to-kill” policy against Palestinians in cases where the victims did not pose an imminent threat to the lives of the Israeli soldiers who then killed them.

Faraj said this was the case in Masalma’s shooting, which he said amounts to a “war crime”. 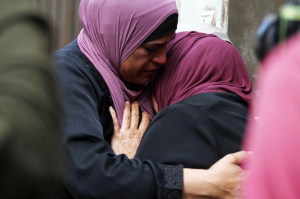 Mourners attend the funeral of Palestinian Salah al-Buraiki, 19, killed overnight by Israeli forces during a raid in the occupied West Bank city of Jenin on 21 October 2022. Photo: Reuters

“When the soldiers saw the car, they didn’t wait a single moment before shooting. It was caught on video,” he said, referring to CCTV footage purportedly from the scene showing the car slowing down before being targeted.

MEE could not independently verify the footage.

“The soldier didn’t even know who was in the car. They wanted to kill for the sake of it,” Faraj added.

The shooting on Monday morning happened during a raid-and-arrest operation by Israeli forces.

Such operations occur on a near-nightly basis in the occupied West Bank and they often lead to the wounding or killing of Palestinians.

At least 138 Palestinians, including at least 30 children, have been killed in the West Bank this year, making it the deadliest on a monthly average for Palestinians since the UN began recording fatalities in 2005.

Tags:ApartheidFreePalestineWarCrimesWestBank
previousGaza Freedom Flotilla To Sail in 2023 To Challenge the Illegal, Immoral and Inhuman Israeli Blockade of Gaza
nextIsraeli forces kill Palestinian 15-year-old girl the day before her birthday. R…