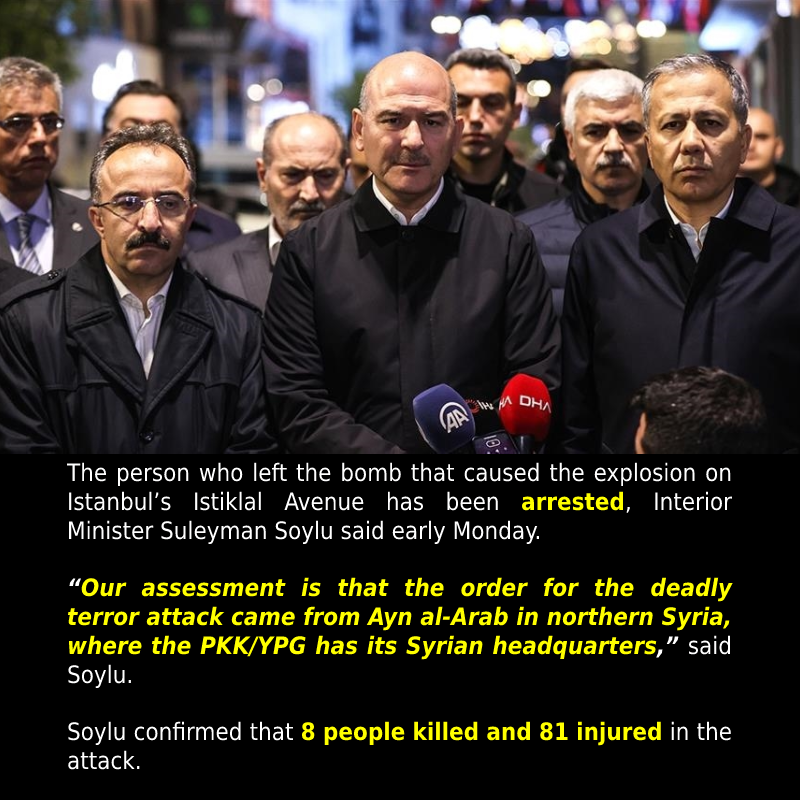 Interior minister says police have arrested ‘the person who left the bomb’ that exploded on Istanbul’s Istiklal Avenue.

Turkish police have arrested a suspect in the bombing in central Istanbul that left at least eight people dead and 81 others wounded, according to an official.

Interior Minister Suleyman Soylu told reporters on Monday that the suspect in custody was the “person who left the bomb that caused the explosion” on a busy thoroughfare in Turkey’s largest city.

Soylu blamed the outlawed Kurdistan Workers Party (PKK) for Sunday’s blast on Istiklal avenue, saying “Our assessment is that the order for the deadly terror attack came from Ayn al-Arab in northern Syria” where he said the group has its Syrian headquarters.

“We will retaliate against those who are responsible for this heinous terror attack,” he said, adding that the death toll has risen from six to eight and that 81 people had been wounded, with two of them in “critical condition”.

No group has claimed responsibility for the blast yet.

Turkish President Recep Tayyip Erdogan on Sunday described the explosion as “treacherous” and said it “smells like terrorism”. Speaking before his departure to the Group of 20 summit in Indonesia, Erdogan said initial information suggested that a “woman had played a part” in the attack.

Justice Minister Bekir Bozdag told A Haber television later on Sunday that the woman was seen sitting on one of the benches on Istiklal Avenue for more than 40 minutes.

The explosion occurred just minutes after she got up, he said.

“There are two possibilities,” he told A Haber. “There’s either a mechanism placed in this bag and it explodes, or someone remotely explodes [it]”.

Al Jazeera has obtained pictures of the woman suspected to be behind the bombing.

Soylu’s announcement on Monday did not add any details about the woman.

Istanbul and other Turkish cities have been targeted in the past by Kurdish separatists, ISIL and other groups, including in a series of attacks in 2015 and 2016.

These include twin bombings outside an Istanbul soccer stadium in December 2016 that killed 38 people and wounded 155. The attack was claimed by an offshoot of the PKK, which has kept up a deadly campaign for Kurdish self-rule in southeastern Turkey since the 1980s and is designated a terrorist group by Turkey, the European Union and the United States.

Regularly targeted by Turkish military operations, the group is also at the heart of a tussle between Sweden and Turkey, which has been blocking Stockholm’s entry into NATO since May, accusing it of leniency towards the PKK.

Condemnations of Sunday’s attack and condolences for the victims rolled in from several countries including Greece, Egypt, Ukraine, the United Kingdom, the US, Azerbaijan, Italy and Pakistan.

Greece “unequivocally” denounced the blast and expressed condolences, while the United States it stood “shoulder-to-shoulder with our NATO ally in countering terrorism”.

French President Emmanuel Macron said in a message to the Turks: “We share your pain. We stand with you in the fight against terrorism”.

Ukrainian President Volodymyr Zelenskyy also tweeted in Turkish: “The pain of the friendly Turkish people is our pain.”

European Council President Charles Michel also sent condolences, tweeting: “My thoughts are with the victims and their families.”

[TRANSLATION: The moment of the explosion on Istiklal Street] 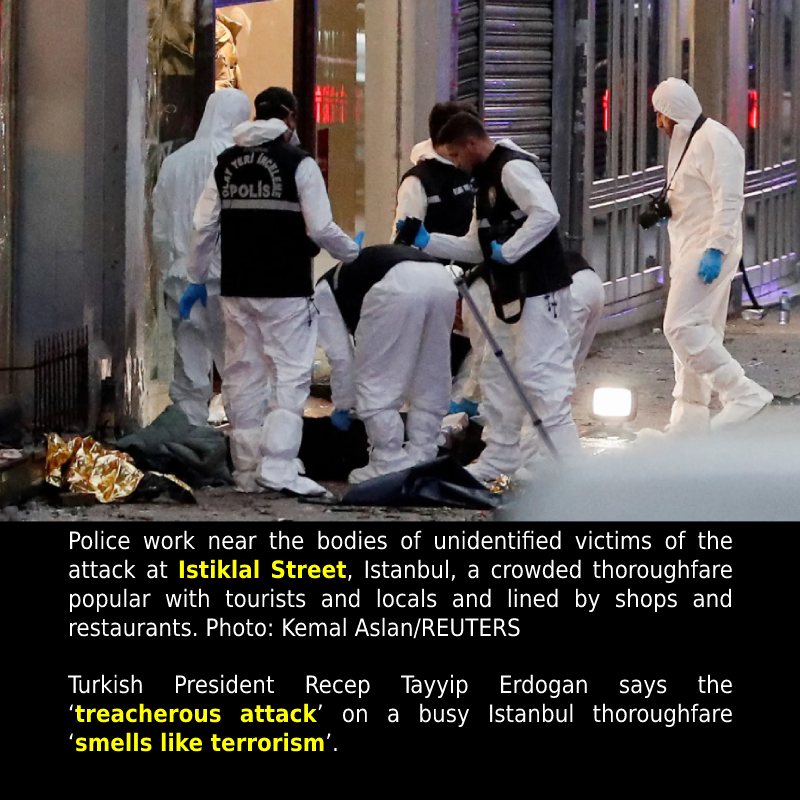