By MEE and agencies. Syrian state media posted a short video of the ‘aggression’ and said there were three others injured in addition to material damages.

Military sources said the air base, at Shayrat, was recently used by the Iranian airforce, Reuters reported, without elaborating.

Syrian state media posted a short video of the “aggression” and said there were material damages.

One military source, who was not authorised to speak publicly, said the strikes had targeted a runway in the sprawling air base that is located southeast of Homs city. 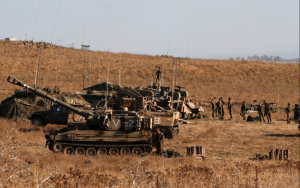 Asked about the strike, a spokesperson for the Israeli military said it did not comment on foreign reports.

The runway and underground facilities at Shayrat, including aircraft shelters, have undergone a major expansion by the Russia military in the last three years, the military source said.

Russia, which maintains a major military presence in Syria, has forces stationed near Shayrat air base and uses the base, security sources say.

Regional and intelligence sources say Israel has in recent months intensified strikes on Syrian airports and air bases to disrupt Iran’s increasing use of aerial supply lines to deliver arms to allies in Syria and Lebanon including Lebanon’s Iran-backed Hezbollah.

The UK-based Syrian Observatory for Human Rights, which monitors such events, said a warehouse for Iranian militias and Hezbollah located within Shayrat air base was destroyed in Sunday’s strike.

Opposition military sources say Iranian militias hold sway in large swathes of western Homs province near the Lebanese border and to the east where they have a string of bases.

Iran, which poured thousands of its fighters to help Syrian President Bashar al-Assad win his battle against insurgents, says its military presence in Syria is limited to a limited number of advisors.

Israel has been mounting attacks in Syria for years against what it has described as Iranian and Iran-backed forces that have deployed there during the war, which began more than a decade ago.