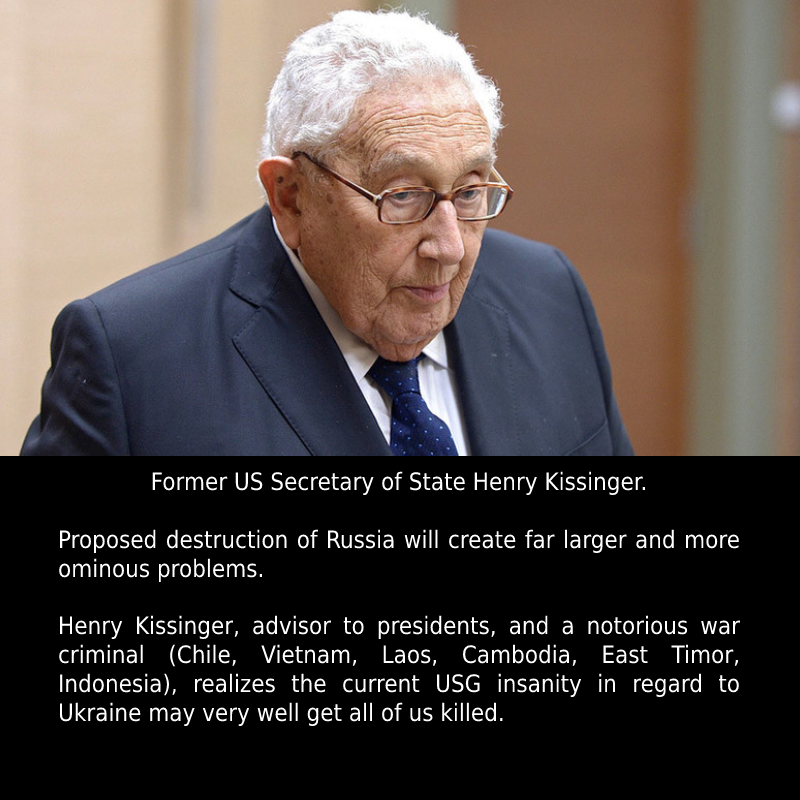 Kissinger: It's Time For Negotiated Peace In Ukraine To Avoid World War https://t.co/9Jqn8oMDYa

“Former US Secretary of State Henry Kissinger has again called for urgently finding a path of negotiated settlement to the war in Ukraine, warning that the entire world is in danger as nuclear-armed superpowers inch closer toward disastrous direct confrontation,” writes Zero Hedge.

“A peace process should link Ukraine to NATO, however expressed. The alternative of neutrality is no longer meaningful,” he emphasized. He warned that continued attempts to render Russia “impotent” could result in an uncontrollable and unpredictable spiral. He laid out that along with the sought after “dissolution” of Russia would come a massive power vacuum out of which new threats to the whole world would emerge as bigger powers rush in.

In a new essay, former Secretary of State Henry Kissinger said if Russia was dissolved, the enormous territory could become a "contested vacuum." https://t.co/0apOYY11lu

Ukraine would decide on the timing and contents of any negotiation framework with Russia, according to a readout of Secretary of State Antony Blinken (@SecBlinken). #RussiaUkraineWar pic.twitter.com/6elqrmd6y9

Zelensky will not negotiate unless Russia removes its troops and relinquishes Crimea, Donetsk, and Luhansk, in addition to compensation for war damages. During internationally monitored referenda in these territories, the respective populations voted to separate from Ukraine. Although Ukraine is described as a democracy in the west, the government does not respect the wishes of the people. It is a cardinal rule for the state: any move toward secession of territory must be violently opposed. In response to separatist demands, following the US-orchestrated coup of 2014, the new Nazi-tinged government began bombarding Donbas.

The Russians are frustrated by Zelensky’s obstinate and absolutist demands, thus making a negotiated settlement impossible. Not even the USG, if it decides to do so, can get Zelensky to the negotiating table. In November, Vladimir Dzhabarov of Russia’s Federation Council remarked on the trustworthiness of Zelensky.

“Even if they [the Americans] order Zelensky to begin talks, how can we hold talks with him, with Mr. Zelensky, who says one thing in the morning and quite a different thing in the evening, sending contradictory messages,” Vladimir Dzhabarov, first deputy chairman of the international committee of Russia’s Federation Council (upper parliament house), told a news conference.

Zelensky demands a return to Ukraine’s 1991 borders when the Soviet Union collapsed.

In short, the problem is not Russia. It is Zelensky, the Biden administration, and its state department. They have created a situation where a negotiated settlement is impossible, thus leaving Russia little choice short of turning Ukraine into an uninhabitable wasteland, a dystopian landscape devoid of water, food, heated shelter, electricity, and the other necessities of civilized life.

So long as the west refuses to consider Russia’s legitimate security concerns regarding Ukraine and the encroachment of NATO, the war will continue, thus increasing the possibility of nuclear brinkmanship.

The idea has long been to initiate ethnic and religious conflict on the periphery of the Soviet Union and later the Russian Federation. An example of this was the use of the Afghan Mujahideen in the Tajikistani Civil War. It is well-known the Mujahideen, an austere Sunni Wahhabi sect, received assistance, weapons, and training from the CIA and Pakistani intelligence.

The long-running effort to destabilize, neutralize, and dismember Russia from its southern periphery is a cause célèbre for the neocons. The American Committee for Peace in Chechnya, founded in 1999, is a who’s who of notorious and criminal neocons, including Richard Perle, Elliot Abrams, Kenneth Adelman, Midge Decter, Frank Gaffney, Michal Leeden, and former CIA boss James Woolsey.

Following 9/11 and the Bush invasions, a few people became suspicious. John Laughland wrote in 2004, two years after the invasion of Iraq:

Allegations are even being made in Russia that the west itself is somehow behind the Chechen rebellion, and that the purpose of such support is to weaken Russia, and to drive her out of the Caucasus. The fact that the Chechens are believed to use as a base the Pankisi gorge in neighbouring Georgia—a country which aspires to join Nato, has an extremely pro-American government, and where the US already has a significant military presence—only encourages such speculation. Putin himself even seemed to lend credence to the idea in his interview with foreign journalists on Monday.

And now there is a national-tribal crisis brewing in the Balkans, an aftershock of the USG’s direct involvement in Serbia, then Yugoslavia, most pointedly its 78-day bombing of that country in 1998, many aspects of which constitute unpunished war crimes (including but not limited to the use of internationally outlawed cluster munitions).

“US-NATO covert support the KLA goes back to the mid-1990s. In the year preceding the 1999 bombing of Yugoslavia, the KLA was quite openly supported by the Clinton administration,” writes Prof Michel Chossudovsky.

The “elder statesman” Kissinger understands what is at risk in the current standoff in Ukraine. In 1970, aware Vietnam had become a quagmire dividing America, Kissinger entered into secret negotiations (without Nixon’s knowledge) with Vietnam’s Le Duc Tho, a high-ranking member of the Hanoi Politburo. And while these negotiations did not result in a peace deal, it can be said they were held, never mind the true intentions of the parties involved.

The USG act of diplomatic stonewalling—and instructing Kyiv to do likewise—is making the Ukraine conflict in Europe more dangerous by the day. It is devolving into a humanitarian disaster for the Ukrainian people and soldiers alike, the latter killed in droves every week as the Kyiv government forces them into the shredding machine of Russian artillery. The Big Lie is that Ukraine can win this war.

The war criminal Kissinger is one year shy of 100. It is possible he may not make it as the war in Ukraine grinds onward, consuming precious human life, inflicting untold misery, and threatening a thermonuclear planetary extinction before Kissinger’s next birthday.