The deportation of Salah Hammouri 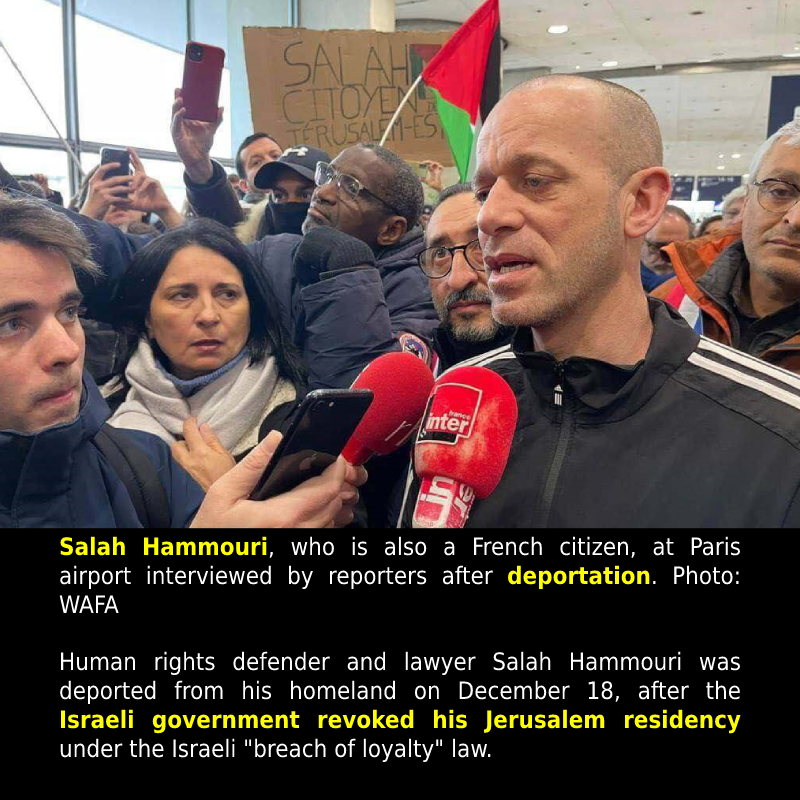 On Sunday, December 18, Israeli authorities forcibly deported Palestinian lawyer, human rights defender, and father of two, Salah Hammouri, from his homeland. Born in Jerusalem to a French mother, Hammouri is also a French citizen and, until recently, held a Jerusalem ID before it was revoked by the Israeli government.

Hammouri’s deportation was ordered by Israeli authorities almost two weeks ago under allegations of affiliation with terrorist activities. Human rights groups have called on the French government to stop the expulsion.

On Saturday, December 17, the French Ministry of Foreign Affairs and Hammouri’s family in France were informed by Israeli authorities that he would be deported to Paris. Neither Salah nor his lawyers were officially informed, an anonymous source informed Mondoweiss.

“Justice has been done to the terrorist and he has been deported from Israel,” Ayalet Shaked, Israel’s Minister of Interior, said Sunday. “It is a great achievement to have been able to cause, just before the end of my term, his expulsion,” the Interior Minister boasted.

“No decision of forced expulsion or ethnic cleansing frightens me,” Hammouri said in a final letter before his imposed deportation.

“It neither stops nor deters us from our pursuit of resistance,” Hammouri stated in defiance. “There is no power on earth which can uproot Palestine and the Palestinian people from our minds and our existence.”

From prison to exile

The French ministry condemned the deportation on Sunday. The ministry said in a statement that it had “taken full action, including at the highest level of the State, to ensure that Mr. Salah Hamouri’s rights are respected, that he benefits from all legal remedies and that he can lead a normal life in Jerusalem, where he was born, resides and wishes to live.”

Flown from Ben Gurion Airport, Hammouri arrived in Paris at approximately 10:00 a.m., where he was greeted by his family, supporters, and reporters. Separated from his wife and children, Hammouri has been held in Israeli prisons since March, where he faced anti-Palestinian discrimination and mistreatment.

“One of the worst places a human being can be put in is prison,” Hammouri wrote in July. “It is a place which resembles nowhere else in the world. It pulverizes us and flattens our dreams, aspirations, and hopes like the mashing down of an olive on the olive press.”

The 37-year-old has been illegally held in Israeli prisons without charge or trial in what is known in Israeli military courts as “administrative detention.” This means imprisonment by order of “secret evidence” that neither the accused nor their lawyers are able to know or challenge in court.

Hardly a stranger to Israeli abuses, Hammouri was a young boy living in Jerusalem at the time of his first arrest in 2001, only 16 years old.

In May, Hammouri submitted a case to the International Criminal Court urging them to investigate Israel for war crimes. That same month, Israeli soldiers shot and killed the Palestinian-American journalist Shireen Abu Akleh in Jenin as she wore her PRESS jacket, clearly marking her as a journalist.

“This occupation does not see us, or treat us, as human beings with the right to live as free people do,” Hammouri wrote from inside prison earlier in July.

From cell no.4 of Ofer military prison in Betunia, he also authored a letter appealing to French president Emmanuel Macron. “What is the reason behind your double standard in the treatment of people living under oppression?” Hammouri had written. “I have seen you on several occasions defending the people of Ukraine and speaking up for the pain and torture they are facing, while you seem to have forgotten, or are deliberately ignoring, that we Palestinians have been facing injustices and occupation for 78 years now.”

For years, Hammouri has been experiencing judicial harassment and abuse. As a Palestinian Jerusalemite, his experience is entwined with the overarching reality of Palestinians in the face of intensified settler expansion.

“All of us Palestinians of Jerusalem are considered strangers in our own annexed city, ‘residents’ without citizenship. From the construction of the wall to racist laws that discriminate against non-Jewish populations regarding the right to property and construction,” Hammouri wrote for Mondoweiss. “We – my friends on the other side of the wall in Sheikh Jarrah and Silwan – are fighting against plans for mass expulsion.

Loyalty laws as an instrument of ethnic cleansing

“We didn’t think it was possible to deport somebody from his birthplace,” Hammouri’s mother Denise had said recently in response to her son’s expulsion from his homeland.

Yet the legal precedent for Hammouri’s eventual deportation was first set in 2016 under Israel’s “breach of loyalty” law, which at the time ruled that residency could be stripped from Palestinians with Jerusalem IDs who were found to be “disloyal” to the State. This same law was recently expanded in scope last July when the Israeli Supreme Court ruled that citizenship would be stripped from Israeli citizens under the same breach of loyalty.

On October 18, 2021, Hammouri first received a letter from the Israeli Ministry of Interior informing him that his Jerusalem residency was revoked. Many Palestinian residents of Jerusalem also face the same threat of having their residency revoked after the passing of this apartheid law, which constitutes a crime against humanity.

“This occupation does not see us, or treat us, as human beings with the right to live as free people do,” Hammouri wrote from inside prison earlier in July.

The loyalty law is a modern instrument of ethnic cleansing. Expanding its scope to now include Palestinians holding Israeli citizenship (who comprise about 20% of the total Israeli population), the law is meant to control the Palestinian population.

The deportation of persons who document and expose Israeli crimes, however, is not exclusive to Palestinians. In 2019, the Israeli government deported Human Rights Watch Director Omar Shakir. Kenneth Roth, the organization’s Executive Director at the time, explained that Shakir’s deportation “shows why the international community must reboot its approach to Israel’s deteriorating human rights record.”

“A government that expels a leading human rights investigator is not likely to stop its systematic oppression of Palestinians under occupation without much greater international pressure,” Roth said.

Upon arriving in Paris, Hammouri told the press: “we changed location but the fight continues.”

“We can’t abandon Palestine,” he emphasized. “Resistance is our right.”